LIBERAL TEARS: Gorsuch Being Confirmed Is AWESOME – But THIS Takes The Cake! [WATCH]

Yesterday was a very good day.[1] Judge Neil Gorsuch was confirmed as the next Supreme Court Justice. He is a constitutionalist and an originalist just as Antonin Scalia was. The Republicans were forced to use the Nuclear Option to confirm Gorsuch with a simple majority. Everyone is hyperventilating over that, but remember, that is the way this used to be done. The action taken by the Republicans “is consistent with both the Constitution and the Senate rules and two centuries of Senate tradition, and is fully aligned with the intent of the Founders as well.” And guess what, that line isn’t mine. It’s from the Huffington Post[2] in 2013 when Harry Reid brought forth the Nuclear Option. Heh.

Chuck Schumer, Nancy Pelosi and the left had this coming big time. I’m laughing and all smiles over this. The left is in tears over this… they had a meltdown. Why? Because they tried to extort the Republicans, telling them they would confirm Gorsuch if they took the Nuclear Option out of play for the next four years. McConnell and the Republicans told them to get stuffed and here we are. And this is not the end. At least one more justice will step down this summer and it will probably be Justice Kennedy, who is the swing vote on the bench. Then there is Ginsberg who is getting two old to be on the High Court anymore. Trump thinks there could be up to four more Justices to replace during his term and the Supreme Court is about to go conservative for decades to come. 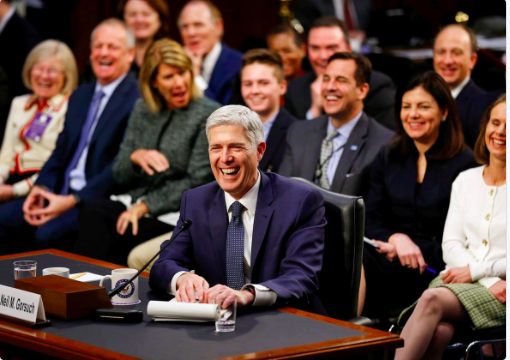 One of the main reasons that many voted for President Donald Trump was the belief that he would appoint a conservative Supreme Court Justice.

Now, after much debate, with great transparency of the process and the confirmation hearing, that promise has been fulfilled.

And liberals are having an absolute cow.

They are absolutely furious. Once again the reality of losing it too hard for them, so everything is “illegitimate”

Liberals want to build an alternate reality safe space, where Hillary Clinton is President, Merrick Garland is on the Supreme Court and unicorns roam the progressive plain.

Think Progress editor has a tantrum like a 5 year old, cue stamping feet to this rant:

Nancy Pelosi is basically calling it the end of the world… maybe hers, ours not so much. Many people voted for Trump solely on the issue of the Supreme Court. So far, they have not been disappointed. In fact, President Trump has kept his promises here. Gorsuch is set to start ruling next week. He can’t start soon enough in my book. Constitutional conservatives have waited a long time for another originalist to be placed on the High Court. It’s like Christmas for us.

The moonbats on the left have no concept of what the Constitution really entails. They are furious because Gorsuch does not view it as a living, breathing document. It is the law as written and the rule of law shall prevail. Democrats refuse to face reality that conservatives are finally populating the Supreme Court. They are furious. Good. If you want to blame someone, blame Harry Reid. His move has now bitten the Democrats royally in the rear and has empowered the right. Snoopy dance time.

Shameful chapter in US history closes as Gorsuch not Garland confirmed. We won't forget. #utpol[5]

If you ever see Neil Gorsuch be sure to say.

Gorsuch confirmed. This was Merrick Garland’s seat. GOP stole it. Don’t ever forget that or act like it’s normal https://t.co/2wvD0XV5tO[8]

Women marched in January because they feared the worst. Today, those fears were confirmed along with Neil Gorsuch. #SCOTUS[10]

Senate Republicans resorted to extreme tactics in order to install a radical justice to the Supreme Court. https://t.co/U55xiOi2rq[12] pic.twitter.com/fDrEDYEBbT[13]

straight up bullshit. So much for democracy

Republican senate just took us 300 years back, changing the rules to confirm the very rightwing conservative Gorsuch to the Supreme Court ????????

GOP hitting new lows all the time. He did not get the votes, this is not the democratic way #StolenSeat[21] #illegitimate[22] #shameful[23]

It is according to Harry Reid and your girl Liz Warren. "Elections have consequences" I believe a quote from 44.