McConnell Drops A Bomb On The Left: We’re Going To Confirm Gorsuch This Week [VIDEO] 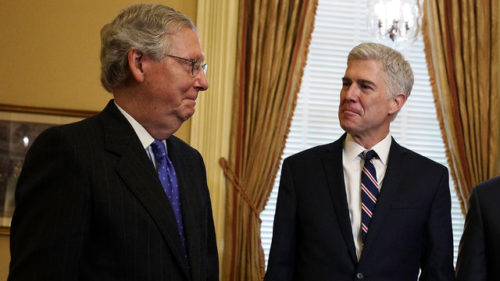 It is always satisfying to see an enemy fall into his own trap[2]. In fact, Psalm 7 says that those who “dig a deep pit to trap others” will “fall into it themselves. The trouble they make for others backfires on them.” And that is exactly what we see with Gorsuch confirmation process. The Senate Democrats, while Obama was President, voted to change the process for confirming nominees. At the time they believed it would help their side and their nominees be confirmed more quickly and over the objections of the Senate GOP. This process is known as “the nuclear option.” The “nuclear option,” also known as the “constitutional option,” is a Senate parliamentary procedure that allows them to override a rule or precedent by a simple majority of 51 votes, instead of by a super-majority of 60 votes. It was put in place and meant to be used by Democrats, most especially after Hillary was elected President, so they could cram through her Liberal nominees to the Supreme Court. There’s only one problem with that, Hillary lost. And now “the nuclear option” is on the table for the Senate Republicans to use in getting Gorsuch confirmed over the objections of the Democrats.

Senator Majority Leader Mitch McConnell said this week on Fox News Sunday, “Judge Gorsuch deserves to be confirmed. Unanimously well-qualified by the American Bar Association, my counterpart, Sen. Schumer, once called that the gold standard. I think it is noteworthy that no Supreme Court justice has ever, in the history of our country, been stopped by a partisan filibuster — ever.”

He insisted, “We’re going to confirm Judge Gorsuch this week.”

And for the Democrats that insistence means only one thing; that the “nuclear option,” the weapon they created to use against the GOP, just might be used against them instead. And that is some excellent poetic justice.