These Prominent Democrats Go Public To DEFY Chuck Schumer, Plan To Vote For…

Well, this is a pleasant surprise[1]. Two Democrats, Sen. Joe Manchin and Sen. Heidi Heitkamp, are both saying they will defy Chuck-you Schumer and vote for Judge Neil Gorsuch to become the next Supreme Court Justice. Of course, the nuclear option is still on the table and I personally believe that if more Dems don’t pledge their vote to Gorsuch, the Republicans will use it. Schumer had tried to strike a deal saying that they would confirm Gorsuch if the Republicans vowed not to use the nuclear option on the next Supreme Court pick, but that isn’t going to fly. The option will definitely be used on the next Justice and I support that.

Both of these Democrats are saying that the Supreme Court should be above politics and it should be. But those such as Chuck Schumer and Nancy Pelosi have dishonestly made it ALL about politics. Manchin says he will not go along with the Democrat’s filibuster. Good for him. It’s good to know there are still a few Dems over there that have integrity. Schumer and Pelosi sure don’t. 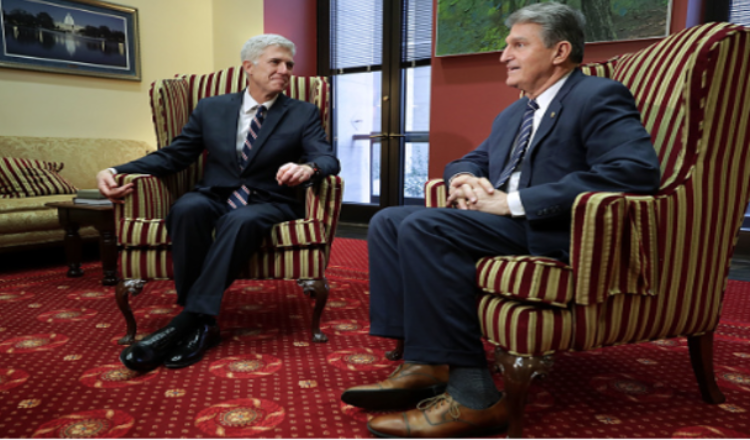 Sen. Joe Manchin is a Democrat.

But he’s not a dishonest one.

He pretty much calls things as he sees them and he knows that Judge Neil Gorsuch is eminently qualified.

He has now announced that he is going to buck Senate Minority leader Chuck Schumer.

He not only will not go along with a filibuster but he’s actually going to vote for Gorsuch.

Manchin basically lays it out.

Manchin’s statement may even take a slight slap at Democratic Senator Kamala Harris.

Harris said she wouldn’t vote for Gorsuch because he was concerned about “legalisms” over “real lives,” as though a judge shouldn’t be concerned about the law, but should decide because of feelings. Manchin says, “Throughout Judge Gorsuch’s career, he has come to his legal rulings objectively, through the letter of the law rather than through his own opinion.”

Democratic Sen. Heidi Heitkamp has also announced she is going to vote for Gorsuch, “Regardless of which party is in the White House, the U.S. Supreme Court should be above politics.”

Gorsuch is a fantastic pick with a spotless record. He’s a good and ethical man who puts the rule of law above all else. He’s an originalist and a constitutionalist. In other words, he’s perfect for the bench. The left hates that and have tried to smear him every way they could. They haven’t found squat on him and it hasn’t worked. Sucks to be them.

Joe Manchin and Heidi Heitkamp are voting on qualifications and what is best for the country, not what is best for the left. That’s the way it should be and was meant to be. The filibuster is coming, so the nuclear option may yet be utilized here. If it is, the Dems only have themselves to blame. Judge Gorsuch will sit on the bench of the Supreme Court one way or another.