Neil Gorsuch is Donald Trump’s pick to replace the late Antonin Scalia and the nomination had conservatives cheering. Democrats, however, quickly leapt at the chance to block the nomination, no matter how qualified he may be. But his opening statement proved why he was such a good choice[1]… and the crowd loved it. 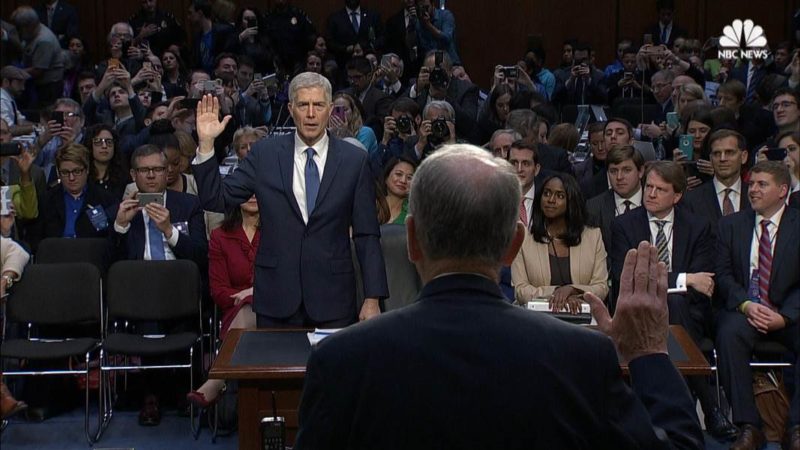 In his opening remarks to the Judiciary Committee, Gorsuch spoke emotionally from the heart and what he had to say was so powerful, that everyone watching got emotional, too.

“Sitting here, I’m acutely aware of my own imperfections and I pledge to each of you and the American people that if I’m confirmed, I will do all my powers permit to be a faithful servant to the Constitution and laws of this great nation,” he said. “Mr. Chairman, I could not even attempt to do this without Louise, my wife of more than 20 years. The sacrifices she has made and her open and giving heart leaves me in awe. I love you so much.”

Gorsuch then hugged his wife, voice cracking as he spoke.

“We started off in a place very different than this one, tiny apartment, little to show for it,” he continued. “And when Louise’s mother first came to visit, she was concerned by the conditions, understandably. As I headed out the door to work, I’ll never forget her whispering to her daughter in a voice I think intended to be just loud enough for me to hear, ‘Are you sure he’s really a lawyer?'”

He then spoke about a judge named Increase Sumner, who greatly influenced Gorsuch.

“As a lawyer, he was faithful and able. As a judge, patient, impartial, decisive. In private life, he was affectionate and mild. In public life, he was dignified and firm. Party feuds were allayed by the correctness of his conduct. Calumny was silenced by the weight of his virtues and rancor softened by the amenity of his manners,” he said. “If confirmed, I pledge to you that I will do everything in my power to be that man.”

No wonder the people watching got so emotional!

What did you think of his opening statement?