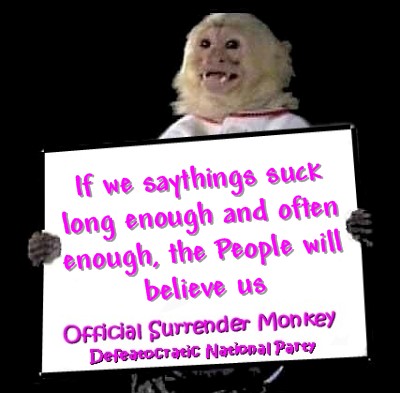 Did you watch or listen to the Trump press conference[2] Thursday? It was pretty amazing. Here was a guy speaking like a CEO, not a politician. A guy who spoke his mind. A guy who spoke to citizens, not the Political Class. A guy who didn’t lecture for 10 minutes on one question and never answer.

Of course, the Political Class didn’t like it, nor did the Media Industrial Complex. Because they are not used to it, and, quite frankly, they would find a way to bash Trump no matter what in their Trump Derangement Syndrome. The unhinged pronouncements emanating from the Professional Media Class are amazing. They’re Very Concerned that Trump is rallying his base. They were giddy when Obama did this. Upset that Trump is “campaigning.” Yet, never concerned that Obama never stopped. Etc and so on. The double standards are amazing. And they really do not like that Trump has come after the media yet again, forgetting that they themselves create the situation with their utter partisanship, readily apparent throughout the pages and broadcasts of the majority of the Credentialed Media, so, here we get the NY Times Editorial Board

For a Troubled President, the Media Is a Satisfying Target[3]

After a tumultuous month of incumbency, President Trump actually plans to begin his 2020 re-election campaign Saturday in Florida with one of his most vital campaign props in tow — the news media that he makes a daily art form of undermining with institutional and personal attacks.

“You know, you’re dishonest people,” he told reporters at his news conference Thursday, with the ease of an insult comic in a Las Vegas lounge. “But I’m not ranting and raving. I love this. I’m having a good time doing it,” the president was fair enough to admit as he lambasted the media nonstop.

“Fake news!” “Russia scam!” “Ruse!” he proclaimed, dismissing reports on the turmoil in his White House.

After a while it began to make sense: Of course, Mr. Trump craves a break from the White House caldron for the familiar escape to another hyperbolic campaign stop at an airport hangar full of zealous supporters. He needed the press to play the punching bag that so delighted his political base. Aides filed for re-election on Inauguration Day, an extraordinary step that lets Mr. Trump raise campaign funds for what will be a state of endless campaigning.

The news conference proved to be another signature recapitulation of himself by himself — Mr. Trump’s relentless superlatives of self-congratulation, his paint-ball putdowns of any and all critics, his swaggering dismissal of controversies already occurring in plain sight.

The constant Moonbat attacks on Trump are one of the reasons Trump won. And Trump knows that the vast majority of the media, which votes Democrat and allows their person political beliefs to color all their coverage, will never give him a chance and or honest coverage so why not fight back? Republicans are always damned if they do damned if they don’t, so, he might as well “do” and stay strong.

He’d better get used to it. American history shows there’s no reasonable alternative to the power of human curiosity in a democracy, especially when a president dares to claim exclusive ownership of reality.

“Will we be incessantly harassed and vilified?” Martin Baron, editor of The Washington Post, asked after the election[4]. “The answer, I believe, is pretty simple,” he said with barely a shrug. “Just do our job. Do it as it’s supposed to be done.”

Except, they aren’t doing it as it’s supposed to be done. Well, maybe if you’re Salon, which is the direction the media is going. They’re even more unhinged than during the Bush years.

People wanted different. They’re tired of the same old politics. They got. And as long as the media bangs this same tired drum, they’ll keep losing.