They are called “Female Protection Forces of the Land Between the Two Rivers” (Tigris and Euphrates) and these 50 women are taking a stand against ISIS and their slaughter of Christians.This new force is fairly new and consists of 50 mothers, daughters and friends[1]: 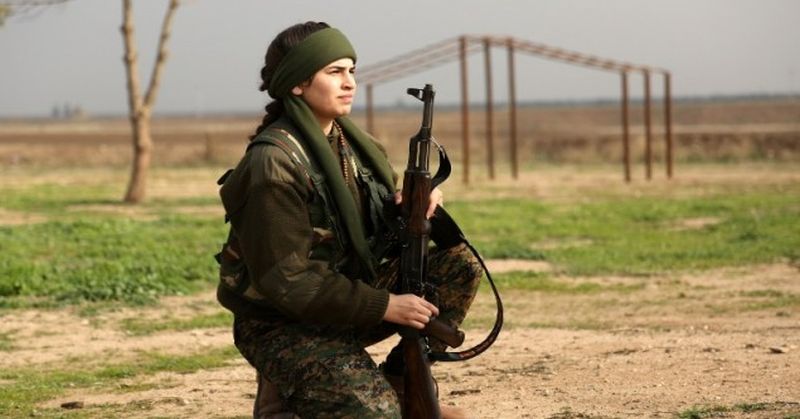 The fierce-looking 36-year-old in fatigues from the Syriac Christian minority in the northeast believes she is making the future safe for her children.

“I miss Limar and Gabriella and worry that they must be hungry, thirsty and cold. But I try to tell them I’m fighting to protect their future,” she told AFP.

Babylonia belongs to a small, recently created battalion of Syriac Christian women in Hasakeh province who are fighting IS.

They are following in the footsteps of Syria’s other main female force battling the jihadists — the women of the YPJ, the female counterpart to the Kurdish People’s Protection Units or YPG.

So far the new force is small, with around 50 graduates so far from its training camp in the town of Al-Qahtaniyeh, also known as Kabre Hyore in Syriac, and Tirbespi in Kurdish.

But the “Female Protection Forces of the Land Between the Two Rivers” — the area between the Tigris and Euphrates waterways historically inhabited by Syriacs — is teeming with women eager to prove their worth against IS.

It was actually Babylonia’s husband who encouraged her to leave Limar, nine, and six-year-old Gabriella and join the unit whose first recruits graduated in August.

Himself a fighter, he urged her to take up arms to “fight against the idea that the Syriac woman is good for nothing except housekeeping and make-up,” she said.

“I’m a practicing Christian and thinking about my children makes me stronger and more determined in my fight against Daesh,” added Babylonia, using the Arabic acronym for IS.

Syriac Christians belong to the eastern Christian tradition and pray in Aramaic. They include both Orthodox and Catholic branches, and constitute around 15 percent of Syria’s 1.2 million Christians.

Good for these ladies for bringing the fight to ISIS. Now all they need to do is dip anything they touch in pigs blood to make the insult of killing them even more painful.