In Just 36 Seconds, This Syrian Refugee SHUTS DOWN Leftists [VIDEO]

Typical.[1] In the UK, a whole bunch of arrogant leftists were protesting President Trump and British Prime Minister Theresa May at Number 10 Downing Street. They are against the missile strikes on the Syrian airbase to stop Assad’s chemical warfare. A Syrian refugee tried to talk sense into them and they shouted him down. He was telling them that bombing that airbase was a good thing and saved Syrian lives, but they didn’t want to hear it. One woman actually started dressing this guy down as if she knew more about Syria than he did and he comes from the war-torn country. Idiots.

These people don’t want to hear reason… they hate President Trump, America and Israel. They support a murderous dictator-thug and don’t care that he is using Sarin gas against babies with no remorse whatsoever. It took just 36 seconds for this Syrian refugee to make painfully clear that sanity is in short supply among leftists these days. Good for him… he is speaking the truth and there will be those who listen even if many don’t. 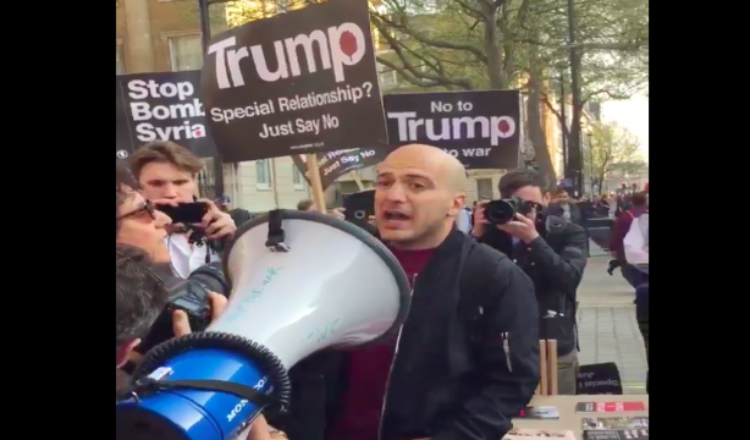 “Stop The War UK” Leftists were out in London at Number 10 Downing Street protesting against the U.S. strikes in Syria in retaliation for the chemical attacks against Syrian civilians.

In this short video, you can hear them chanting against President Donald Trump and against British Prime Minister Theresa May, who said she supported the U.S. strike.

You can see a man, a Syrian refugee, Hassan Akkad, in the middle asking for them to listen to him. He tells them, “You’re all wrong” and that, “I am a refugee.”

But this short video exposes leftists in a nutshell.

Watch as a woman shouts at him and wags her finger in his face, because she knows more than him about what’s going on in his own country.

Watch as he asks the woman with the megaphone to give him a chance to speak, when an older organizer-looking type tells the woman to “keep chanting” (not to give it to him).

Hassan Akkad is a brave man who wants to save his people. He probably even wants to go home, but his country is ripped apart by a deadly civil war and a butcher is in control, supported by the Russians and the Iranians. He kept telling them: “You’re all wrong” and that, “I am a refugee.” I think, female or not, if I had been him and some sea hag had wagged her finger in my face like that, I would have slapped the ever loving crap out of her.

The leftists claim to speak for Syrians, but in reality they don’t care about them. Their hate for Trump and for Israel is what propels their actions. They wouldn’t even give Hassan a chance to speak. Yeah, that’s real equality for you on the left. Hassan said they didn’t care about listening or Syrians, they were just about being anti-Western and anti-Israel. These people want chaos and bloodshed in the West. More importantly, they want revolution in the streets.

I don't care who ordered the strikes. The destruction of an airbase means less #Syrians[4] will die from Assad's barrel bombs.This is good news

If you want to know what a person really believes, watch their actions… leftists are transparent in theirs. John Hawkins talks about this in his new book ‘Things Young Adults Should Know’. Check it out: