When I saw this cover on the Globe, you just know I had to grab it: 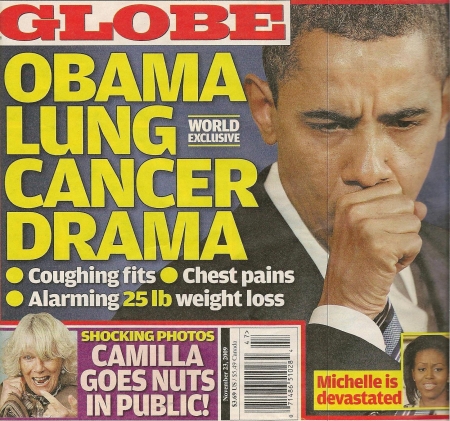 This is an intriguing choice for the Globe because you may be able to hide a temper tantrum or an “enemies list” from the public, but you can’t really hide lung cancer for that long. So, if you were going to make up a disease that Barack Obama has, you’d think you’d go with something like syphilis. He could hide that, could go slowly crazy, etc., etc.

Of course, once you get into the story, they hedge their bets pretty hard:

“Everyone fears he has lung cancer because of his smoking and coughing. And he can’t keep food down. In fact, at the last White House banquet he left the room suddenly and vomited.”

…”There no doubt that Obama’s a sick man,” said a second insider. “He appears to be in pain — you can see it in his face. I think he’s refusing to see a doctor because he knows there’s a serious problem and he’d rather just ignore it.”

“Lung cancer” is not a diagnosis you just guess at, Globe! Even for you guys, that’s cheesy.

PS: The President does look as if he’s lost some weight lately. Maybe it’s the stress of the job. Hope he isn’t sick.

PS #2: If Obama did have lung cancer, do you think the mainstream media would….

A) Proclaim that he is dying,: so we should pass health care reform in his honor?

B) Start running pieces about how he is the greatest President ever and is being taken from us too soon?

C) Would proclaim that lung cancer is “cool now” because Barack Obama has it?

Say that’s outrageous if you like, but I 100% guarantee you that if Obama’s lung cancer existed somewhere other than in the fevered imaginations of the people who write for the Globe, we’d get a significant helping of A, B, and C from the Left.