California is so blue that even their Republicans are liberal!

Governor Jerry Brown exchanged political favors for votes on his repugnant gas tax, which garnered him the support of Republican State Senator Anthony Canella, the only Republican to back the bill. 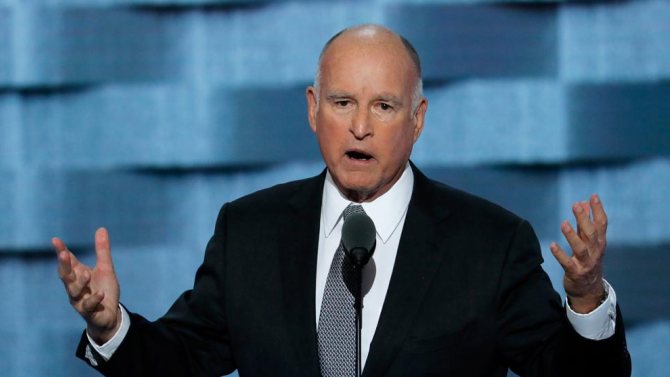 According to the LA Times,[2] the bill now promises an estimated $1B in pork projects to lawmakers who were hesitant to support the 12-cent gas tax hike.

… Brown and legislative dealers promised nearly $1 billion for the pet projects of lawmakers who had been sitting on the fence before they were persuaded to vote for the bill.

The funding “arrangements,” as Brown called them, helped the governor and legislators break a two-year Sacramento stalemate on transportation funding.

Brown rejects the idea that promising favors in exchange for votes taints the legislative process. In fact, he argues that it was a small price to pay for the nearly $5.2B in annual revenue for the state which he claims will go toward road repairs. (Having just come back from a vacation in California, I can tell you that nothing short of an act of God will fix those roads.)

The deal made with Canella includes raised fees at the DMV. Now you don’t just get to stand there for agonizing periods of time, you get to pay more too! Everyone (in the government) wins!

Instead of backpedaling on his support, Canella was proud, saying “I got the things I asked for, so apparently I made the most compelling case.”

This is everything that is wrong with politics in a nutshell. Canella didn’t even ask his constituents what they wanted, he just wanted to get something that he believed he needed. A deal that actually makes life more difficult for his voters, not easier.

If I were a Republican living in California, I would seriously consider moving. Especially since you can’t even seem to trust your own elected representative.