I Can Destroy Your Reputation and Career in Two Minutes 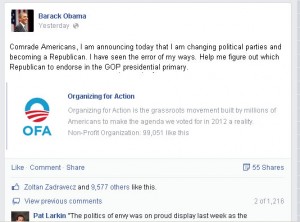 [1]There is a new form of cyberbullying out there and it is scary, because it could derail the professional career of any conservative – even those working in apolitical jobs. Slimy folks like “Busta Troll” are hijacking Facebook pages of conservatives, replacing the content with goats and anti-conservative messages. Some believe a goat is used because it is a Satanic symbol; many of the conservatives are targeted because of their Christian or Jewish views.

The conservative Citizens’ Post page on Facebook was hijacked by the “Goatz Alliance,” which also goes by the name “Busta Troll,” by pretending to be from a conservative organization called Freedom Alliance. The bullies also set up several fake conservative Facebook groups to give themselves credibility. Once they cajoled the owner into giving them admin privileges, the hijackers posted anti-conservative propaganda all over the page. On one of their fake Facebook pages, a cyber thug claims to be paid by George Soros.

Another conservative Facebook page, “America, the Next Generation,” washijacked not just once but twice by the cyber thugs, who pretended to offer help fixing a rude post about Obama, but then posted goats. R.W. Burgin, who runs a Facebook page called The Seditionist, told The Examiner that liberal cyber thugs copied photos from his page and photoshopped them into parody pages and videos, including alongside pornography. He was called a pedophile and his employer was contacted, in order to try and get him fired.

The cyber thugs are clever and have a lot of time on their hands. The main thug, Busta Troll, apparently gave an anonymous interview to the Atlanta Conservative Examiner, boasting that he had “goated” 17 Facebook pages. Then he supposedly set up an elaborate scheme where he pretended that a conservative named Kevin Kopper had his Facebook page hijacked, so Kopper offered $1,000 to anyone who could out Busta Troll. Kopper claimed he found someone for $1,000 who identified Busta Troll as Christopher Lyman. Busta Troll explains the scheme on his website and how all the names involved are fake. It looks like Busta Troll’s identity may have finally been discovered. Fortunately, Facebook appears to becracking down on Busta Troll, at least for the most part.

This is just the tip of the iceberg. There are even more disturbing ways cyber thugs are going after conservative activists. Donna Cruse, a vocal Tea Party activist, had one of these hateful people photoshop her Facebook page to make it look like she said something racist related to her credit union employer and how they give out loans. The screenshot was then posted publicly by Americans Against the Tea Party, and the credit union was contacted to complain about her.

The problem? They should have contacted the credit union first. The bank told the anonymous coward that she hadn’t been employed there since 2010! Her alleged comment makes no sense in 2014. Unfortunately, her current employer watched as the cyber storm occurred on the credit union’s site, and due to the frenzied public reaction to this hoax, she was immediately suspended and has been placed on indefinite, unpaid suspension. She is nowreceiving death threats. Her previous co-workers are afraid to associate with her, possibly out of fear for their jobs. Even more outrageous, Donna has many black friends – who I happened to notice in photos with her on her Facebook page – and last year, she shaved all her hair offher head to show her support for an ethnic friend who was undergoing chemotherapy for cancer.

Nevertheless, her current employer launched an investigation into her and found what they believed to be another Facebook profile of hers, but it was actually a dormant account of a leftist troll who simply changed the name and added a stolen photo, causing further investigation into her personally. In other words, Donna has become “the criminal” in the story. This is how they terrorize people on the right to the point of suicide.

I am fairly good with photoshopping, and know how simple it would be to superimpose a fake comment onto a screenshot of someone’s Facebook page. Iphotoshopped a screenshot of Barack Obama’s Facebook page to say he was becoming a Republican in less than two minutes. How this tactic could be used to take out conservatives is frankly terrifying. The best way to prevent it is to spread the word and explain how the photoshopping works. Someone loves Hitler? Someone wants to kill Obama? Someone is a white supremacist? Someone hates gays? Photoshopped sex photos? The possibilities are endless. The left is excellent at making this kind of thing go viral and getting activists to call and make complaints.

Progressives and their comrades in the media are always trying to claim there is a link between right-wing conservatives and offensive viewpoints – even though the truth is abhorrent viewpoints are more closely connected to the left – so some employers may believe the anonymous thugs over a Tea Party member. Especially if they pile it on by having a few more anonymous people post comments after the article claiming the person has made offensive comments in the past (even though they have no proof), and bang! It begins to sound convincing.

One little two-minute photoshopping incident and your entire career aspirations could be over – forever. Anyone who Googles you for the rest of your life will likely find the abhorrent things about you. And it’s not just what someone said about you – it’s what YOU supposedly said so it’s even tougher to dispute.

Wikipedia is another forum conservatives need to take on, since it has become the number one source for encyclopedia-like, general information. Trolls – probably mostly unemployed criminals living in their parents’ basements – have taken over much of it, posting horrendous things about conservative people and conservative organizations. Unless someone has a lot of money to pay someone to clean up their reputation, or time to spend hours learning how to maneuver the complexities of editing Wikipedia, this site can significantly hurt their credibility.

Hopefully, entities like Facebook will address this in the future, perhaps by setting up a department to deal with requests for records in order to prove the photoshopping is false. A spammer took my photo and started a fake Facebook profile with it recently; I complained to Facebook and they wouldn’t remove it (fortunately it has since disappeared). Another solution is to set up a website where these incidents can be exposed and debunked. If anyone is looking for a new venture to help conservatives, this would be a very valuable project. Otherwise, expect to see many more conservatives destroyed over false accusations – including some big names.