‘I had to rip my pants off,’ Man burned after iPhone 5 explodes in pocket witnesses could smell burning flesh

No one ever imagines that their cell phone could spontaneously explode. But that’s apparently what happened to Erik Johnson, when his iPhone exploded in his pocket, giving him second and third-degree burns on his leg. 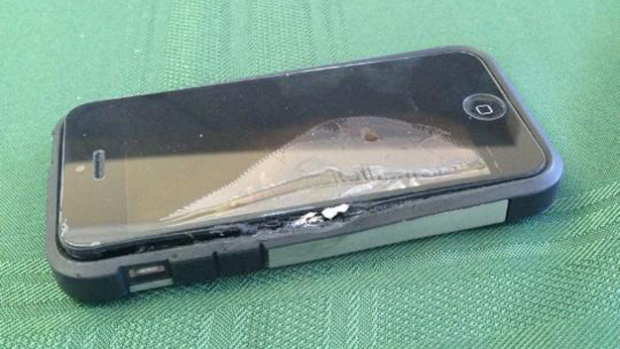 A man is recovering from second and third-degree burns after he says his iPhone exploded in his pocket.

“This is where it came from, the phone right here,” Erik Johnson said, pointing to his iPhone. “My iPhone blew up. And everybody’s answer is, ‘What?’”

Johnson says his iPhone was in his pocket on Valentine’s Day when it spontaneously exploded.

“I bent over to get keys and all I heard was a ‘pop’ and after a little ‘ssshh,’ smoke coming out and just like an instant burn. My leg just starts going on fire, try to get it out, can’t get it out. I was literally jumping up and down to get the phone out of my pocket but I had dress pants on. I think the phone melted my pockets shut so I couldn’t get into it and I had to rip my pants off. A couple of people actually said they could smell my body burning.”

Johnson spent 10 days in the burn unit with second and third-degree burns on his inner thigh.

The freak accident is being blamed on the use of third party charging devices, although Johnson claims he only used an Apple charger. Whatever caused it, it’s certainly a crazy incident that hopefully won’t happen to anyone else.