Three Reasons Why I’m Rooting For Google+ To Fail

In all fairness, you’d have to call Google+ a success already.

The numbers are still a little iffy, but at a minimum, it looks like they’ve reached the 10 million[1] user mark for a service that only debuted on June 28.

That’s good news for Google, but bad news for me, because despite the fact I feel obligated to have an account[2], I really don’t like Google+.

Well, first off, Google is already so huge that you could make a great case that it should be broken up as a monopoly[3]. Now we’re going to add another massive piece to an empire that’s already grown too big?

Furthermore, given the non-stop criticism that’s been aimed at Facebook[4] for not sufficiently protecting its users privacy, it’s extremely ironic that Google is supposed to be the big alternative.

This is a company that SCANS everything you do on their network and feeds it into personalized ads. They also have a CEO who has essentially said that he doesn’t think Google users have a right to any kind of privacy at all[5].

Google CEO Eric Schmidt is the latest Silicon Valley CEO to draw ire after suggesting that folks seeking privacy might not want to look to the Internet to find it. … Schmidt said, appearing on CNBC … “If you have something that you don’t want anyone to know, maybe you shouldn’t be doing it in the first place.”

This guy now has access to all the data you have on Google+.

Last but not least, there’s a fairly selfish reason that I don’t like Google+: It’s just one more social network that I feel compelled to be on — and despite the fact that it’s shiny and new, it really doesn’t add much.

When I look at Google+, this is what I see: 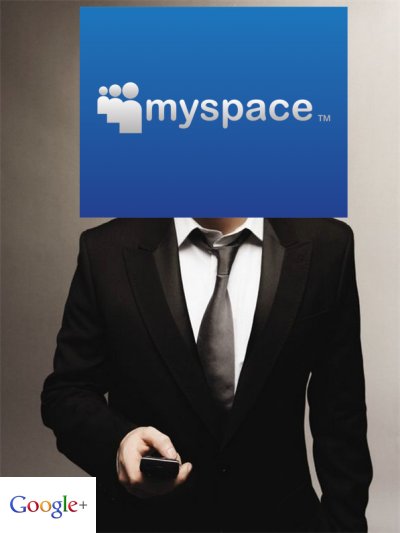 In other words, it’s a nicer, more user friendly MySpace. The real problem with Myspace, when you got right down to it, was that there wasn’t any reason for its existence. Facebook worked better and so, Myspace started to decline.

Well, right out of the box, I have to say that Google+ has the same problem. There’s no compelling reason for it to exist. Sure, people seem to be really impressed by the “circles,” but Facebook already has lists that basically do the same thing and as far I can tell, almost no one seems to use ’em.

Google+ does have one really nifty feature, Hangouts, which are video chats — but, so far at least, most people seem to be interested in using those because of the novelty of it, as opposed to it being a killer feature that people would go to Google+ just to use.

So, why use Google+ at all? Because it’s a new social network, run by Google, that people expect to take off. Maybe that’ll be enough to make it a huge success. After all, look at Linkedin, which has 100 million+ users, despite being almost useless. That being said, I’m still futilely rooting for Google+ to fail, if only because it’ll save me 15 minutes a day to be used on more productive pursuits.