Tweet Of The Year: “Well, I Hope You’ll Die Soon, Stupid Hater, And Bring All Your Stupid Followers With You In Hell”

Normally, I don’t bother to comment on angry tweets aimed in my direction. In fact, I generally block annoying people on Twitter. I don’t mind the fighting, but if I’m going to do it, I want to do it on my web page where it can draw an audience.

So, earlier today, I popped off a tweet promoting a link at Linkiest[1]:

Her name is Lexi Bee and she may be the single most annoying woman on the face of the earth http://bit.ly/cwRH6b[2]

Incidentally, I may be underselling it there. After seeing the video at that link, the commenters at YouTube, who as a general rule are like some sort of cranky mutants who live off of human misery, were even more brutal than normal. Here are some the comments on Lexi Bee’s video[3] at YouTube: 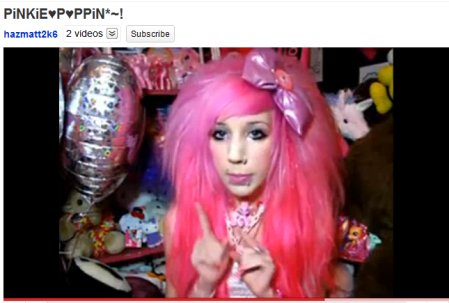 That is just about the most ANNOYING thing I have? EVER witnessed. Oh. My. God

MY EYES! MY EARS!? MY BRAIN!THE PAIN! please kill me!!

Kill it with? fire

Ok, now I understand why in? many countries you can buy a gun…

This. Is. Simply. WRONG

where the f*ck is my revolver!??

Like I said, “even more brutal than normal” — and some of them were too much to post and of course, they were mixed in the “I’d tap that” comments since she’s cute. Granted, she’d be cuter if she didn’t look like an extra from Mad Max Beyond Thunderdome.

Of course, the thing that makes her annoying is the grating way she talks. It’s like the interrogators at Gitmo invented some sort of wacky new language designed:  to irritate human beings and she was the only one who learned it. Seriously, if the choice was listening to Lexi Bee talk for twenty minutes or being waterboarded, I’d have to think about it. Granted, in the end, I would go with her talking, but the fact that I had to think about it says something.

Anyway, getting back to the tweet at hand, somehow Lexi Bee’s cousin / admirer / ultimate fanboy — something — got wind of the tweet and twas a wee bit upset about it:

@davidrafflegeau @RightWingNews you’re jealous because she’s original and unique, and you, you’re a clone with a bible in the head

@davidrafflegeau @RightWingNews and you, you’re the most stupid guy on the earth. Go buy a brain. We should kill people like you, stupid clone

@RightWingNews Well, I hope you’ll die soon, stupid hater, and bring all your stupid followers with you in hell.

Yada, yada, yada. Heard it all before a thousand times. Normally, I would just hit the block button, move on, and forget that this guy existed 30 seconds later…however, that was before I clicked over to see his pic. Oh my, that changed everything: 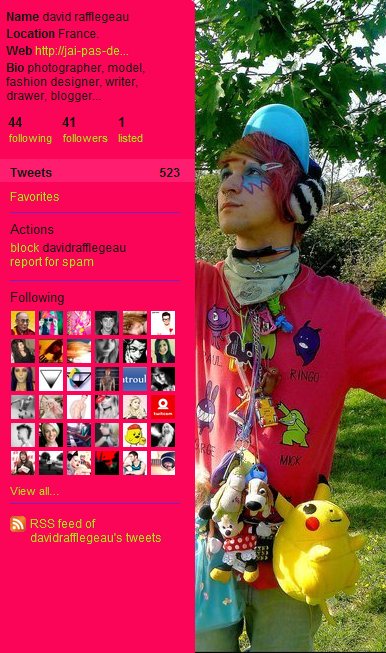 Yes, : folks, that’s right: The male version of Rainbow Brite is reaching out to me from France to let me know he wants me to die and go to Hell. Isn’t the Internet awesome?

PS: I’m sincerely hoping that these two are just random weirdos and not part of some sort of horrifically annoying, yet rapidly growing subculture like Furries or Justin Bieber fans.