BOOM! Ted Cruz Takes On Protesters – SILENCED Them With Solutions To EVERY Problem…VIDEO

Ted Cruz is the ultimate constitutional statesman..[1]. even with rude, crass Trumpsters. In Indiana, he took on a crowd of them and even as they accused him of lying and not being American, he calmly debated them on issues. He asked them how they could support a billionaire who buys politicians. One who is supported by the likes of McConnell, Boehner and King. He flat out told them they were being played for fools, but I doubt any of that got through their brainwashed skulls. Trump is now attracting the socialists that followed Bernie Sanders. He’s for abortion, eminent domain, gun control, a path to citizenship, transgender bathrooms, taxes and on and on… everything liberal is what Trump is for and the right is lining up for what he is serving. Cruz is the constitutional conservative we have waited decades for. He’s a man of faith and hated by the establishment… but these people want Trump. It’s a sad day for America. 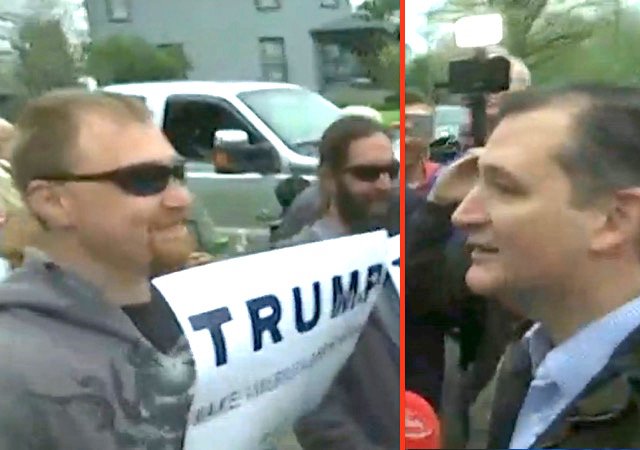 It looks like Ted Cruz got sick of waiting around for Donald Trump to man up and debate him, so he walked up to a loudmouth protester in Indiana and took him on instead!!

The debate was very cordial on Cruz’s side, but the protester was very much like Trump – he just spouted simplistic talking points, insults and slogans.

Ted Cruz handled every objection, every issue with logic and savvy debate skills. I pray he wins Indiana today, but who knows? America is now in very dangerous waters and if Trump becomes the Republican nominee, the party is finished. I for one will leave it and go to a new party that caters to constitutional conservatives. I will not be a party to the final destruction of the Republic. Cruz is what this nation needs and has cried out for. These protesters show what happens to people who follow and believe Donald Trump. My friend Arlen Williams of Gulag Bound[3] had this to say: “Got to be embarrassing for this demonstrator. It shows what begins to happen to people who make the critical error of believing Donald Trump. Ted Cruz presents his case, with his genuine policy commitments and track record, contrasting that with Trump’s self-contradictions and pervasively demonstrated lack of trustworthiness. Instead of listening to fact and reason, the blinkered Trumpkin demonstrates no validity for his own personal faith in The Donald.” These people are angry and vengeful… they just parrot what Trump feeds them. Indiana… please choose carefully and choose Ted Cruz. Our future depends on it.