Obama Admin Pushes Americans To Give Up Internet Control, Ted’s Last Ditch Effort May Have Saved Us! [VIDEO]

Ted Cruz has fought Obama’s[1] giving away of the Internet to international bodies (i.e. Russia, China and Iran) tooth and nail. That hand over is supposed to happen tomorrow. But it may be halted by a law suit that has been brought forth by Cruz. Bless the man. ICANN does not recognize the First Amendment and you can bet that censorship and taxation will spiral out of control if they get their hands on it.

On Wednesday, Cruz grilled ICANN CEO Mr. Göran Marby over the transfer. As ICANN states about Marby’s background: “Göran Marby brings over 20 years experience as a senior executive in the Internet and technology sector, as well as his leadership as Director General at the independent regulatory body Swedish Post and Telecom Authority (PTS), where he worked closely with international organizations and standards bodies.” Cruz had just one question for Marby and you can see it below. The man’s answer says it all. 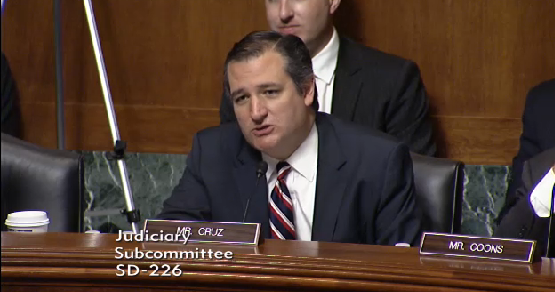 Senator Ted Cruz has been among a handful of conservatives fighting the Obama administration’s allowance of a transfer of control over Internet domain assignment to an international non-profit body.

The move caught many Americans by surprise, and a last ditch legal effort is being waged by four state’s attorneys to put a halt to the transfer—at least until more preparation can be undertaken and additional oversight assured. The lawsuit argues, via Fox News[3]:

The U.S. government has been in charge of domain names for more than three decades, thanks to a Commerce Department agency’s oversight of an obscure, but powerful, Los Angeles-based nonprofit called the Internet Corporation for Assigned Names and Numbers (ICANN).

If the transfer takes place – as it is set to do on Oct. 1 — the suit argues people will “lose the predictability, certainty, and protections that currently flow from federal stewardship of the Internet and instead be subjected to ICANN’s unchecked control.”

You can tell these globalist Marxists hate Ted Cruz. Good. I don’t support Cruz throwing in behind Trump, but that doesn’t mean he isn’t a great leader. I don’t know anyone else other than Mike Lee who fights for the Constitution like Ted Cruz does.

The AGs from Texas, Arizona, Oklahoma and Nevada asked a judge late Wednesday to step in and stop the transition to an international oversight body, after GOP lawmakers failed to stall the move as part of a short-term spending bill.

“Trusting authoritarian regimes to ensure the continued freedom of the internet is lunacy,” Texas Attorney General Ken Paxton said in a statement. “The president does not have the authority to simply give away America’s pioneering role in ensuring that the internet remains a place where free expression can flourish.”

If the transfer takes place – as it is set to do on Oct. 1st — the suit argues people will “lose the predictability, certainty, and protections that currently flow from federal stewardship of the Internet and instead be subjected to ICANN’s unchecked control.” God help us if that transfer does happen tomorrow.

1 question from Cruz and he shows why internet control should stay in the US.
Obama betrayed Americans one more time. pic.twitter.com/aKL4Iya7XQ[4]