I’m soooo freaking sick of the lies[1] from the Trump campaign out there. They have called Ted Cruz a liar and accused him of bribing and stealing delegates, when nothing could be further from the truth. Everything Cruz has done has been honest and aboveboard. Unlike Donald Trump[2] who is having his campaign strong-arm delegates in Delaware. Delegates are being threatened with lawsuits and hateful Twitter campaigns if they don’t fall in line with Trump there. It’s despicable. If you can’t bribe them with Trump’s billions, he’ll sue them out of existence. Instead of shining the light on that though, the media goes after an incident that was innocent where a little girl passed $5 and a note to Cruz during an appearance. Cruz then handed both to a Cruz staffer who collects things given to Cruz. It was a touching moment, not bribery. And it’s just viciously scummy to paint it otherwise. 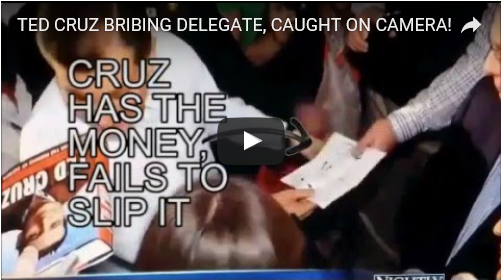 “The ‘delegate’ is Bruce Redden, a Cruz staffer, collecting things that people hand Ted Cruz as he shakes hands, signs books, and takes pictures after every event.

The money is a $5 donation that a supporter gave to their small child to hand to the senator, along with a picture the child drew. It was actually a great moment and indicative of the kind of amazing support we have from the grassroots.”

The Delaware GOP met with Trump’s guy Uddo, who used to be with Ben Carson and is the one threatening everyone. After a meeting of the state party executive committee last week, tensions with Uddo flared again, when one member asked Uddo whether Trump would be visiting the state. Uddo gestured toward officials who oversee the party’s rules and said, “I don’t know if you guys have any business asking for a favor.” Trump is acting like a mob boss, not a candidate. And he’s still accusing Cruz of bribery and lying… in the image from the video of the alleged bribery, you see Cruz handing materials to a man with a long-sleeved plaid shirt. In the image, shot from a different angle, you can clearly see the man wearing the very same shirt is Cruz’s Aide Bruce Redden. Additionally, you can see a man in both images wearing a dark blazer and light blue shirt standing next to Redden and Cruz – one of numerous points of verification between the two videos. It’s obviously Cruz’s staffer. Trump trolls need to practice telling the truth for a change and facing the fact that they have a fearless leader who is a Progressive and stands for almost nothing that’s conservative. And you can find that on video and in print everywhere. 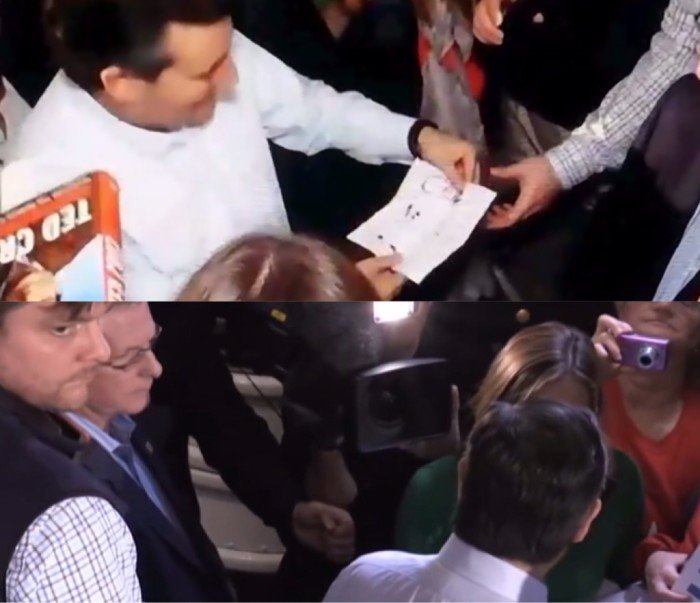