How many of us have faith this strong[1]? Strong enough to bravely die for it. Rarer still are those who convert at the last moment, rather than holding onto a false hope that if they denounce God, that they will be spared. As 20 Coptic Christians were beheaded by ISIS barbarians on a bloody Libyan beach… one man who was not a Christian came to God in his last moments and met death bravely. His evil captors ordered him to denounce Jesus Christ as God and looking at his Christian friends he proclaimed, “their God is my God,” so the terrorists beheaded another saved soul. I ask you, who won in the end? It wasn’t ISIS or Allah. 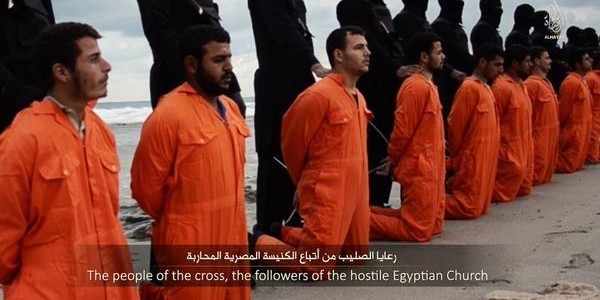 1 of the 21 men who were beheaded[2] a few weeks ago was not a Christian, that is he wasn’t a Christian until he saw the faith of the men who refused to deny Jesus and died for it. By their witness, he decided to believe in Jesus too! Here is the story[3]:

ISIS announced the execution of 21 Copts but only 20 names were confirmed, most of them were from the province of Minya(Upper Egypt). There was an inaccuracy in the number of Egyptian Hostages; there were only 20 Egyptians(Copts). Then who was this remaining one non-Coptic victim?

Ahram-Canadian News was able to gather information about this man. He was a Chadian Citizen (Darker skin shown in picture) who accepted Christianity after seeing the immense faith of his fellow Coptic Christians to die for Christ. When Terrorist forced him to reject Jesus Christ as God, looking at his Christian friends he replied, “their God is my God“ so the terrorist beheaded him also.

Lord, may all of us who follow you and profess your name have faith like those who were martyred for being Christian! They were willing to lay down their lives for you and in the process helped make another man come to believe!

This is not unlike the thief on the cross:

“One of the criminals who were hanged railed at him, saying, “Are you not the Christ? Save yourself and us!” But the other rebuked him, saying, “Do you not fear God, since you are under the same sentence of condemnation? And we indeed justly; for we are receiving the due reward of our deeds; but this man has done nothing wrong.” And he said, “Jesus, remember me when you come in your kingly power.” And he said to him, “Truly, I say to you, today you will be with me in Paradise.” – Luke 23:39-43

I would hope that if I should find myself in a situation like that, that I would have the courage of my convictions and the strength of my faith to carry me home. I would rather die with my soul intact and professing my Christian faith than ever submit to terrorist demons who brutally snuff out every Christian they can find for believing in Jesus. There are some things that are worse then death and there are some things that are very much worth dying for. These men laid down their lives for God – they did what was right and were martyred for their faith. I can’t think of a more noble death or braver men than these. May flights of angels sing thee to thy rest.