As the video says[1], this will teach them to play Frogger in real life. When you decide to stand in traffic to protest, you risk getting mowed down and that is exactly what happened to some Black Lives Matter protesters in Memphis and other places. No word how badly they were injured and I actually at this point don’t care. What does bother me is that they are being allowed to block traffic in places such as Memphis where it is illegal to do so. The cops stood down instead of enforcing the law. Either we are a nation of laws, or we aren’t… at this juncture, it looks like anarchy rules. 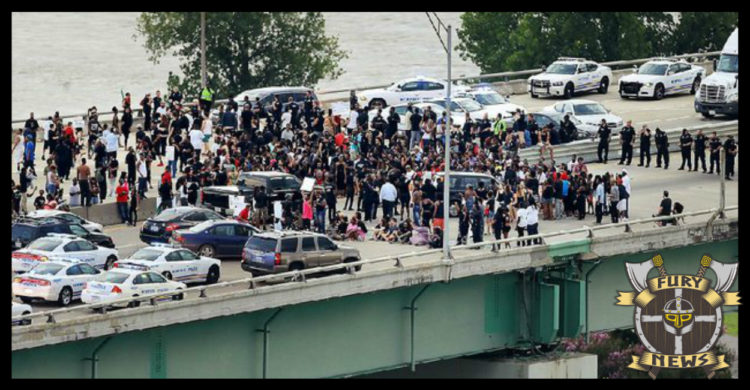 When you try to block traffic on a busy highway, there’s a good chance you could get hit – and that is just what happened to these Black Lives Matter rioters, as caught on camera in various locations recently.

Todd Starnes, of FOX News, asks why police allowed BLM demonstrators to block a bridge, since blocking a roadway is a CRIME under Tennessee law.

The paramedic said later, “When you have someone in dire need of medical attention, I don’t know if there is a cause great enough to hinder someone from getting to the hospital to get medical care.”

I guess only black lives really matter to these thugs… a child, who was very ill, was trying to get to St. Judes. They wouldn’t let the child through and an ambulance had to be called. That child could have died. It looks to me like a whole bunch of folks are fed up with these violent, cop-hating racists… thus the bodies flying like bowling pins and driving over the top of people. That’s not right either, but it’s what it has come to. Things are spinning out of control and fast. A painful lesson to learn is that if you face off with a car, you are going to lose. Case in point.