It seems that every day, a new story is in the news to prove that our world has been turned completely upside down. Taliban fighters were being interrogated after killing and mutilating French soldiers — and yet a British soldier was investigated for abuse simply because he touched the terrorist’s nose with a piece of paper. 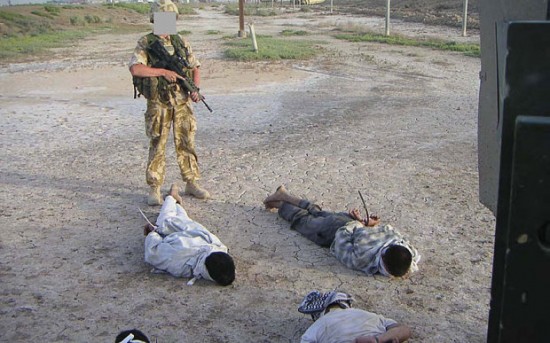 A British soldier was investigated for touching a Taliban fighter on the nose with a sheet of paper during a routine interrogation, a former senior military intelligence officer has disclosed.

The soldier was accused of abuse for a minor infringement which broke rules concerning the touching of detainees during questioning.

On another occasion a military intelligence officer in Iraq was investigated for shouting in a suspect’s ear in case he burst an ear drum. The investigation took place four years after the alleged offence, according to the source.

The claims are being made by a former senior interrogator with the Army, who contacted The Telegraph in the wake of this newspaper’s disclosure that the rules governing interrogations are now so stringent that officers feel tactical questioning has become increasingly pointless.

The former interrogator, who did not wish to be identified, said: “There was an incident in 2008 when French soldiers were massacred and the bodies of four of them were mutilated. We had two of the suspects in detention and they were brought in for questioning. One of the interrogators touched one of the suspects on the nose with an A4 piece of paper and he was investigated by the special investigation branch for abuse.

If we’re going to be forcing our troops to fight these wars with their hands practically tied behind their backs, scared that every move they make could force them to be investigated and punished, then what’s the point of fighting? Our leaders obviously seem to have forgotten that we’re dealing with the worst excuses for human beings on the planet, monsters who are bloodthirsty and brutal, and not fluffy bunnies who need protection from things like pieces of paper.