China Makes Major Moves To Ban Islam Throughout The Country

Man… it’s a sad, sad day[1] when I find myself in agreement with the Communist Chinese. I believe in freedom of religion and before 9/11, I was a strong proponent for all religions, including Islam, to be left alone to worship as they saw fit. Now, I have a severe issue with Islamists – those who in the name of Islam rape, enslave, murder, torture and conquer. Being a tyranny, China has no such qualms. They will ally with Islam in battle to accomplish their goals and then they will turn on them and put them down – all factions in the end plan on doing that to each other thinking that they will be the ones to come out as the victor. Within their own borders, China has decided to preemptively clean house – persecution there is no longer just for Christians… it is much more for Muslims where head coverings are now outlawed and they are being forced to sell items other stores do such as cigarettes and alcohol or lose their businesses. Long beards are now prohibited and I hear that China is pondering outlawing mosques. No more terror for you guys – Communism is the big dog there. 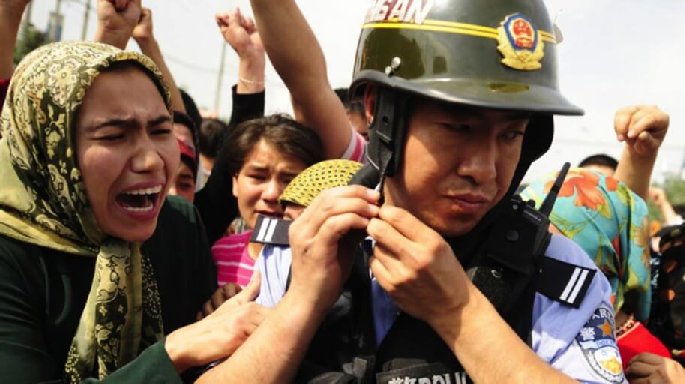 Apparently, China realizes[2] what the West doesn’t – bet you never thought you’d read that here – namely, that Islam is very dangerous[3]. It’s kind of ironic that the oppressive nation sees what free nations don’t: Islam will turn nasty. It always does. Everywhere the religion/political ideology has been given an inch, they’ve taken a mile. Like a rabid dog, once it gets strong enough, it will bite us.

So what is China doing? It’s declaring an all-out war to make sure Islam doesn’t take over and never gains the strength to attack them. So let me simplify it:

– Men are discouraged from growing long beards (often poorly grown ones, might I add).

– Even Islamic restaurants are forced to sell cigarettes and drinks. And …

– They must display them prominently[4]. Any business owner who does not follow this order…will lose their business. Gone.

They’re not tolerating Islam at all. That simple. China sees what’s happening to the West. It sees what happened in France[5], throughout the European[6] world, in Boston[7], and even in Texas[8]. And that’s just the tip of the iceberg! They see it, and they’ve decided to stop any kind of political Islamic plague before it grows out of control.

In other words: China learns. Unlike our inept government, it realizes, ‘Hey, Islam wants destroy us.’ It realizes that Islam is political in nature, not just religious. Don’t get me wrong: communism is terrible, but it’s also what absolves China from the shackling burdens of political correctness. They’d rather survive than be politically correct[9].

Ah well. Maybe one day, the West will realize that freedom can’t exist for those who want to take your freedom. I mean, that’d kinda be like telling your murderer it’s his right to murder you. Wait… what?[10]

China rules with an iron fist – they see how weak and vulnerable the West is and they want no part of that. They have a World War to plan and carry out and don’t need terror distractions. If there’s going to be any conquering, murdering and terror – China reserves the right to be the perpetrator. They don’t have political correctness and groveling in China – you bow before the state or else. But here in America, freedom is being used as an excuse to bus and fly in terrorists to murder us. Victims such as Pamela Geller are being blamed instead of ISIS. The murderous Communists seem to be more sane these days than the effeminate West. Shameful – the once most powerful nation in the world now cowers before Islamists.