“Down, Down USA!” Million Man March in DC Draws Thousands for 20th Anniversary

With police in attendance[1], thousands of radicals, communists and racists packed the National Mall today for the 20th anniversary of the Million Man March. They say there weren’t as many as 20 years ago and the attendees are younger. They went to hear about alleged police brutality and misconduct. They went to hear hatred against whites, Christians and Americans. They weren’t disappointed. Louis Farrakhan of the Nation of Islam was there spewing hate right on cue. The attendees were mostly black men. The media touted reverends and their children who attended. These same people talked of ‘strong black men.’ It’s easy to hide racism and hate behind a religious facade. Farrakhan has done it for many, many years. This time is no different and embraces the Black Lives Matter movement. 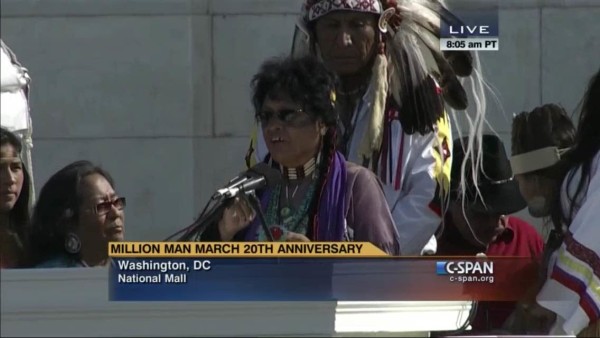 Crowds gathered at the Million Man March in Washington, D.C. were led in a “down, down USA” chant Saturday morning by a female speaker.

The Native American woman proclaimed[3] that Muammar “Gaddafi is still alive” and called for President Barack Obama to pardon Leonard Peltier, a Native American activist who was convicted of murdering two Federal Bureau of Investigation officers in 1975. The woman then led the crowd in a chant of “down, down USA.”

The woman followed a speech from Chief Ernie Longwalker of the Red Wind Nation who seemingly was unhappy about his time on stage being cut short.

“They’re telling me to stop,” he said. “We’ve given you 500 years. You only give us about five minutes.”

Thousands of black people and other minorities descended on the nation’s capital with banners and flags for the “Justice or Else!” rally — the 20th anniversary of the first Million Man March. 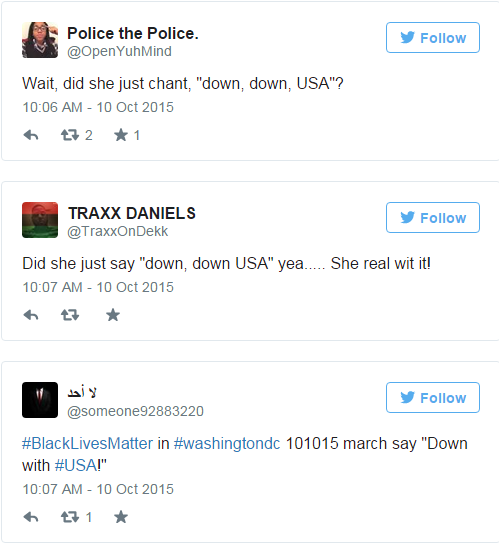 Members of the Congressional Black Caucus spoke. Unlike the first, there is not a push to draw one million, said Minister Ishmael Muhammad, son of Nation of Islam founder Elijah Muhammad and national assistant minister to Nation of Islam leader Louis Farrakhan. The theme this time is “Justice or Else” and is intended to cover not just black Americans, but also Native Americans, Latinos, women, soldiers and the range of racial and ethnic groups, Muhammad said. Speakers will address issues from immigration to Native American land rights to the string of black males who have died at the hands of police in recent years, he said. “As we look at the trend all over the world, the cry for justice is universal,” he said. Yes, by those who would silence everyone else. Farrakhan has repeatedly called for killing all whites and national revolt. The thin blue line stops them and they hate that. 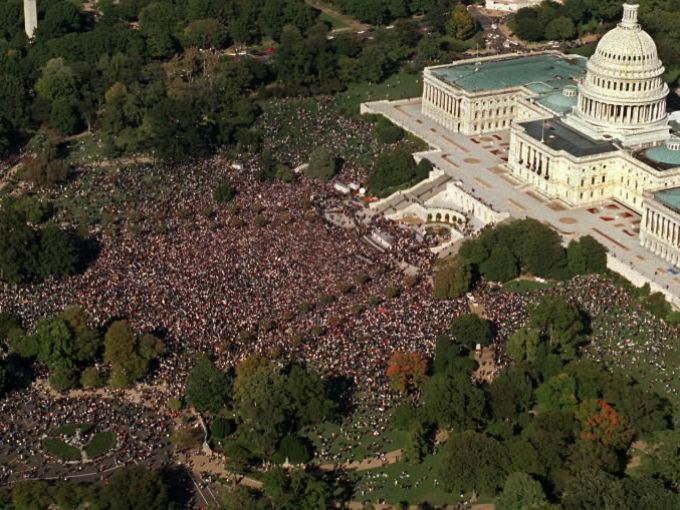 An aerial view of the U.S. Capitol on Monday Oct. 16, 1995, where the Million Man March took place. Hundreds of thousands of men, women and families participated in the largest assembly of black Americans since the 1963 March on Washington. Charles Pereira, AP