After yesterday’s tragic terrorist attack in Chattanooga, Tenn., we thought it would be relevant to revisit 2016 Republican Presidential contender Donald Trump[1]‘s call for an end to gun free zones on military bases. Love him or hate him, you have to admit he is 100% right in this case; “gun free” areas create victims. 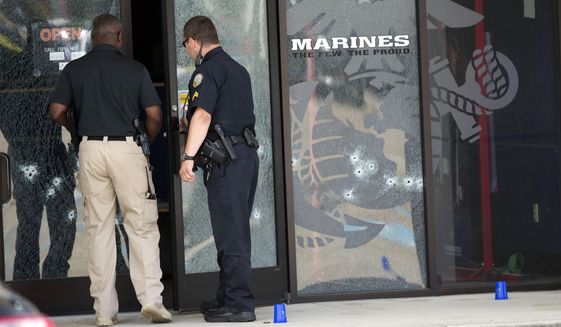 Excerpted from The Washington Examiner[4]: Donald Trump was unfortunately proven right on another one of his top issues Thursday: “gun free zones” at military bases.

Indications that Thursday’s shooting at two military bases in Chattanooga, Tenn., occurred at or near “gun free zones.”

In an interview with the website AmmoLand.com[5], Trump decried the zones on military bases, suggesting that they left highly-trained gun operators without a weapon to fire at attackers, with the exception of military police.

A photo from the scene taken from a local Fox station showed 29 bullet holes around a “gun free zone” sign.

“As Commander-in-Chief, I would mandate that soldiers remain armed and on alert at our military bases.” he told the website Ammoland.com.

“President Clinton never should have passed a ban on soldiers being able to protect themselves on bases. America’s Armed Forces will be armed,” he added to the website closely watched by gun rights groups and the National Rifle Association.

While military police are armed, the rules prohibit soldiers on bases from packing heat even though virtually all have been trained to use guns. In several terror attacks at military bases, critics of the policy have said that soldiers would have been able to thwart the attack if armed.