ISIS Releases SICK New “Poll” That Has World On Alert

ISIS decided to run a sick new poll[1] asking their fans to pick which country should be bombed next after Brussels. The winner… the UK, followed by Russia and Germany. Ironically, both the UK and Germany have flung their borders open and have taken in tons of Islamic refugees. I guess ISIS figures since their Jihadists are already there, why not take them down? As for Russia, they have their own radical Islam problem, but they deal with it much more definitively than most other countries do… i.e. violently. That’s really what it takes to quell the Caliphate within your borders. You wipe them out whenever they try their hand at terrorism. The problem with Russia is that they keep trying to use them as fighters instead of eradicating them. Oh well, it will be the US’ turn soon enough at this rate. Our policies are just as insane as Europe’s and unless we elect a president this time willing to do what is necessary to stop this threat, our colors are going to wind up on the Eiffel Tower… that is if it is still standing by then. 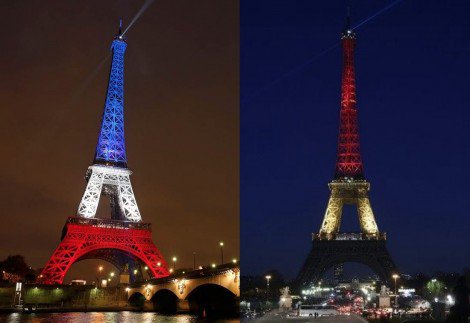 It’s no secret that the Islamic State group[3] has used social media as one of its recruitment tools. Inexplicably, they’ve been able to spread their message of hate and destruction without much interference from the companies who run these services.

However, while everything that the Islamic State thugs have done online has been sick, this is easily the sickest thing yet — a new poll has asked the people who follow them online to vote as to which country they should attack next.

The poll, which was put out after the Brussels attacks, asked “What will be the color of the Eiffel Tower next?”

Only 18 people were dumb enough to answer the poll. The odd thing is that the US didn’t even place in the winner’s circle. We tied with Italy. After the poll was sent out, followers of the Islamic State group tweeted sick messages in response to it. “The Islamic State will attack London, Washington, Rome and all the infidels’ capitals,” read one. “The Crusaders (Western Christians) are blundered and confused,” read another. “Yesterday Paris, today Brussels, and they don’t know where will be the next attack.” I’m sure Obama will get right on this… right after he watches a baseball game with murderous dictators in Cuba, Tangos in Argentina and then hikes in the Andes. But when he’s done with that, he’ll… oh, never mind. He doesn’t give a crap. The world is on alert and Obama is on another vacation. At least it isn’t a golf course. 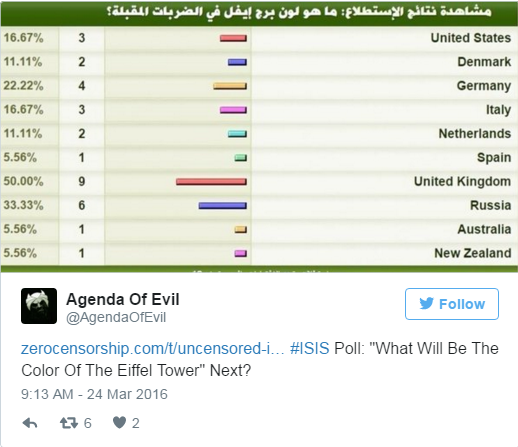