The cruelty of ISIS continues to grow, while the world is apparently unable — or, more likely, unwilling — to stop them. The latest horror has come from accounts that the terrorists actually set their victims on fire to make sure that they weren’t still alive and couldn’t escape. 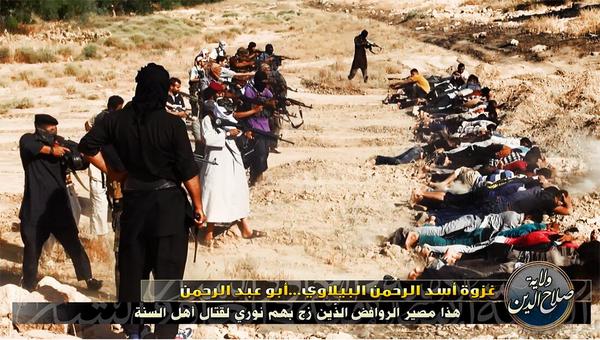 An eyewitness explained how an ISIS leader controlled the chaos. The leader said, “the Sunnis must stand on one side. The Shia, Kurds and Yezidis must stand on the other. If I find out that a Shia is among the Sunnis, I’m going to cut off his head with a sheet of metal.”

After ISIS had divided the groups, they were led to a ravine where they were made to kneel. Then, quenching their thirst for blood, ISIS began gunning the groups down. According to Human Rights Watch, only fifteen out of six hundred survived the slaughter.

For the first time, the survivors are sharing their gripping stories. One survivor said:

“When they approached me, one of the ISIS terrorists told someone I was still breathing. So after I got shot in my arm, they shot two more bullets in my leg. They wounded my left leg. Then they left.

Another group of armed men that was coming down the ravine returned to make sure that everyone was dead. They started burning the dead bodies…when it was my turn they set my right leg on fire. But I had to withstand the pain so they wouldn’t know that I was still breathing.”

Other survivors added that ISIS kept firing until they were “out of ammunition” and that some “prisoners died from their wounds later because they were too weak to escape.”

The sad thing is that our military could easily wipe these monsters off the face of the earth, if only their hands were untied and free to use their full might. Unfortunately, the reality is that our leaders in Washington just don’t have the backbone.