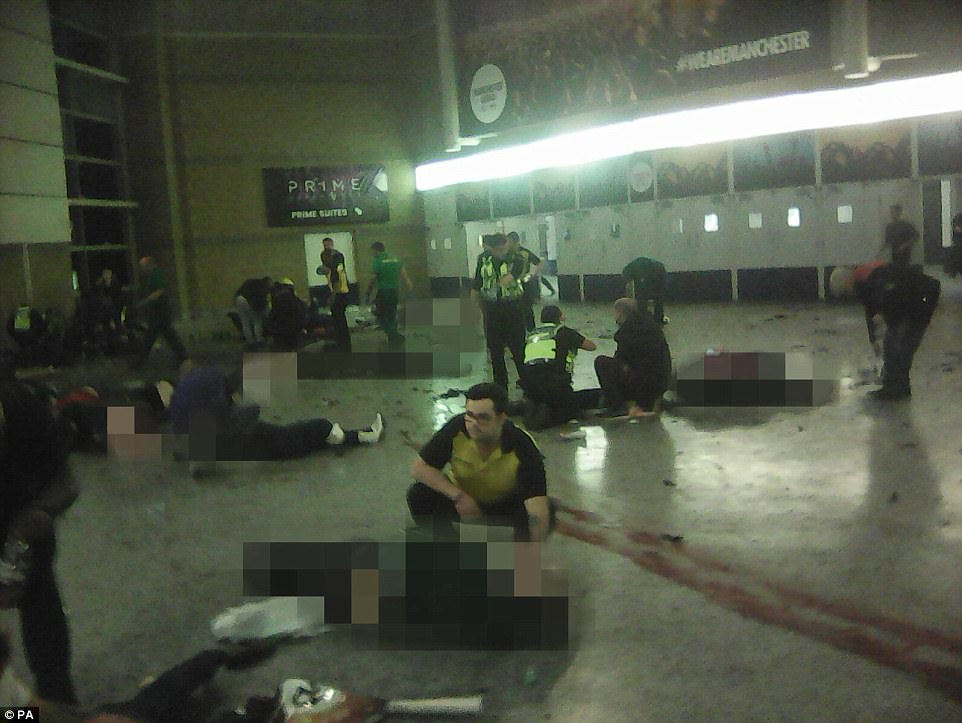 Unsurprisingly, as I keep flipping back and forth, neither MSNBC nor CNN are covering this. It’s Russia Russia Russia

(NY Times[2]) An explosion that appeared to be a suicide bombing killed at least 22 people on Monday night and wounded 59 others at an Ariana Grande concert filled with adoring adolescent fans, in what the police were treating as a terrorist attack.

Panic and mayhem seized the crowd at the Manchester Arena[3] as the blast reverberated through the building, just as the show was ending and pink balloons were dropping from the rafters in a signature flourish by Ms. Grande, a 23-year-old American pop star on an international tour.

Traumatized concertgoers, including children separated from parents, screamed and fled what appeared to be the deadliest episode of terrorism in Britain since the 2005 London transit bombings.

Speaking to reporters early Tuesday, Manchester’s chief constable, Ian Hopkins, said the police learned of the explosion around 10:33 p.m. Children were among those killed, he added, and the wounded were taken to eight hospitals.

Chief Constable Hopkins said that a man had detonated “an improvised explosive device” and had been killed in the blast. He said the police believed that the man had acted alone, but that they were trying to determine whether he had been part of a wider network. Other officials said the police were investigating reports that the device had used nuts and bolts as shrapnel.

Someone captured the moment of the attack in the venue

The moment of an explosion in Manchester Arena on Monday which killed 22 people and injured more than 50 pic.twitter.com/oyyB6ZwcdU[4]

If you look towards the left you see the explosion and hear the bang. I hope to GOD everyone is ok, and so glad Jess and Em are. #manchester[6] pic.twitter.com/q81KHGEJ6E[7]

The jihadi (we all know which religion this guy is going to end up a part of, right?) was apparently known to police[9], and may have reconnoitered the center prior. A big question now is whether he was a true lone wolf (as much as a person who makes up the 1%, which equates to 16 million or more Islamists, can be a lone wolf with so many peers) or part of something wider.

Nope, still nothing on Morning Joe, and Headline News is also yapping about Michael Flynn.

(UK Daily Mail[10]) President Donald Trump began his remarks Tuesday in the historic West Bank town of Bethlehem by calling the suicide bomber who killed 22 people in the British city of Manchester hours earlier a ‘loser’ – and said that will be his preferred term from now on for terrorist killers.

‘We stand in absolute solidarity with the people of the United Kingdom,’ the president said, standing alongside Palestinian Authority president Mahmoud Abbas.

‘So many young, beautiful, innocent people living and enjoying their lives, murdered by evil losers in life.’

‘I won’t call them monsters because,’ he said. “They would like that term. They would think that’s a great name. I will call them from now on ‘losers’ because that’s what they are. And we’ll have more of them. But they’re losers, just remember that.’

World leaders have offered condolences from around the world. Meanwhile, breaking news is that a man has been arrested

(UK Mirror[11]) Police have arrested a 23-year-old man over the Manchester Arena terror attack[12] that killed 22 and injured 59.

It is understood the arrest was made in the south of the city this morning.

The arrest was made in connection with the bombing at last night’s Ariana Grande concert, the Manchester Evening News reported[13].

It was a horrific act, certainly perpetrated by despicable people who have perverted their religion to push their repressive ideology. Something we see time and time again.