Allegedly, the Turkish military[1] stormed the CNN Turk studio live on air, streaming on Facebook and forced everyone out. I think it is much more likely it was Erdogan’s goons as the whole coup was staged as I understand it and was in the makings for more than a year. Regardless of who was behind it, those men must have been terrified. Over 6,000 civilians have now been arrested by Erdogan. Thousands of judges and almost 3,000 military have been detained. Rumor has it there are going to be mass executions as Erdogan continues his Islamic purge and solidifies his dictatorship in Turkey. Welcome to the Ottoman Empire 2.0. 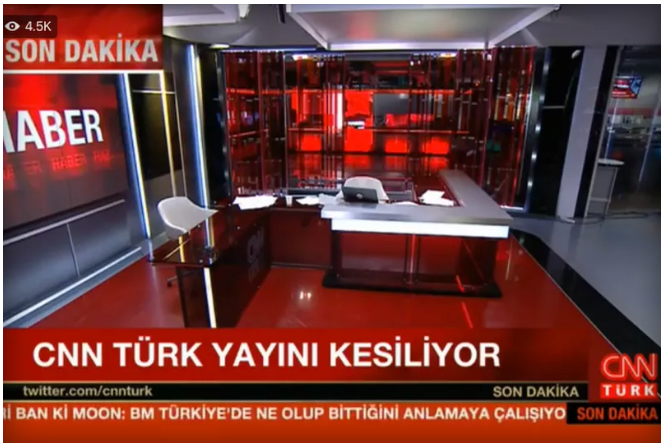 The television studio of CNN Turk[3] allegedly was taken over by armed members of the country’s military and its anchors forced off the air. However, the station was broadcasting its feed on Facebook Live[4] at the time, and the stream is currently showing an empty studio while a crowd chants outside.

Gunfire and explosions have also been heard on the stream, where the audio appears to be from an open mic from within the studio. According to a report on CNN[5], the CNNTurk anchor said “We don’t know how much longer we can continue our broadcast,” and that “we will try to continue our broadcast until the last moment.”

The situation in Turkey is very fluid at the moment, with parts of the Turkish military claiming it has “taken over” the country, while President Recep Tayyip Erdogan has said the coup has been repelled and called on the public to take to the streets in support of the Government.

CNN Turk appears to be back on the air, with CNN Turk General Manager Ferhat Borate and Editor-in-Chief Erdogan Aktas telling the story[6] of what happened. They are now saying that the police have arrested the soldiers that seized the media outlet. But remember, things are never really what they appear to be in these cases. As the Huffington Post[7] put it, the scenes of disoriented staff filing out of the newsroom with guns pointed at them is yet another reminder of the way social media is affecting world events. At least 161 civilians have been killed and word on the street there is that women should veil themselves immediately. Sharia law is about to be imposed mercilessly. The military has always been the power check in Turkey – when the government would move towards dictatorship or too heavily into an Islamic theocratic mode, they would step in and overthrow the current leader. Erdogan headed them off at the pass this time and turned the tables on them. Erdogan may be accusing Obama and the US of plotting the coup, but something tells me that Obama and his best bud have been conferring over this for a long time. We are in a world where communism, socialists and dictators are not only accepted, they are encouraged.