You’ve got to be freaking kidding me![1] A Jewish rabbi was just stabbed in France by a Jihadist yelling ‘Allahu Akbar!’ and the French police are claiming it’s NOT TERRORISM. There’s no way they can possibly be that moronic. If it looks and stabs like a Jihadist terrorist, it’s a Jihadist terrorist you idiots.

They claim he has mental health problems. Show me a murdering asshat that doesn’t have mental issues. They just had an incident where a priest was beheaded and another where women on a beach were attacked… but their knee-jerk response is that it’s not terror-related. The more they do this, the more people are going to think EVERYTHING is terrorist-related and it will stir even more hatred against Muslims. In other words, it will do the exact opposite of what they are trying to do. Not only do they look like pathetic fools, they are going to get even more people killed. 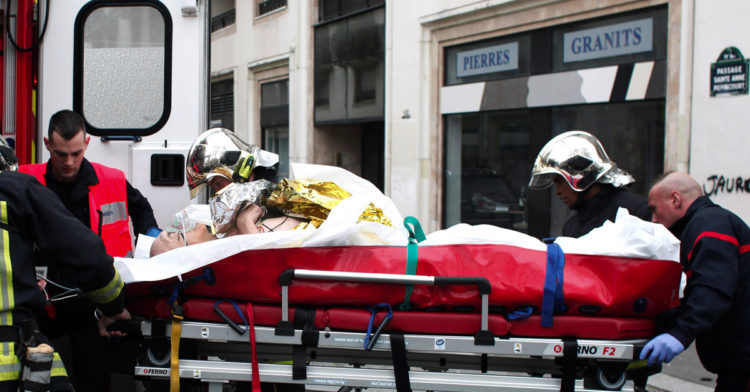 The stabbing took place in the Jewish quarter of the north east French city of Strasbourg. The attacker was restrained by a witness before being arrested by police following the broad daylight attack in the middle of the street.

Several witnesses heard the man shout Allahu Akbar when carrying out the assault.

The 62-year-old Hasidic man does not have serious injuries. He is thought to be in a stable condition in the hospital. Sources close to the investigation say terrorism has already been ruled out, with the attacker thought to have mental health problems.

I’m relieved the rabbi does not have life-threatening injuries from this attack. A rabbi dressed in Jewish garb, who is walking in the Jewish quarter and is stabbed by a Muslim yelling ‘Allahu Akbar!’ and their first response is that it isn’t terrorism. Unreal.

This is the problem with France, Germany and Europe in general. The police and authorities are under orders to NOT call it terrorism and to NOT attribute it to Islam. I can’t quite decide if it is out of fear of instigating more attacks, which they get anyway, or if they are intentionally trying to stir up violence. This insanity makes no sense whatsoever.

Europe is a war zone now… people there are intent on not getting stabbed, blown up, raped or beheaded. Not exactly good times in Europe. And the French are behaving like, well… the French. And worse yet, our leaders praise this crap. This is bad news for Americans at home and abroad because it’s coming here.