What ISIS is doing[1] to Christians is monstrous and barbaric. It is an utter genocide. “We will show the Armenians and the Christians who we are… We have been ordered not to leave any Armenians in the area.” — Islamic rebels, Aleppo, Syria. That is what these people are facing and their only crime is following Jesus instead of Allah.

Thousands of Christians are fleeing Eritrea due to extreme persecution. A report describes Eritrea as “one of the world’s fastest emptying nations” and the “North Korea of Africa.” The majority of the 40,000 who fled to Italy last year are Christians. This is now happening all over the Middle East and is especially evident in Africa. They are not alone… Iran is just as bad or worse. They engage in prolonged detention, torture and executions based primarily or entirely upon the religion of the accused. That religion is the one of Christians. 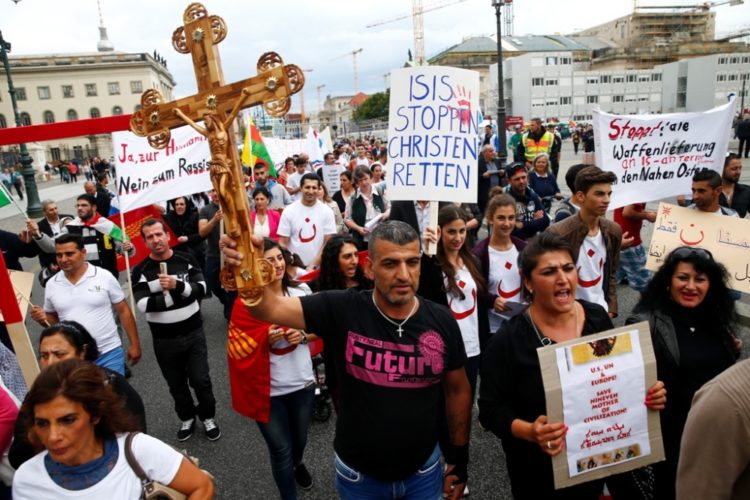 From the Gatestone Institute:

More reports[3] of the brutal treatment that Christians and other minorities experienced at the hands of the Islamic State (SIS) emerged during May. One account told of a couple who, after their children were abducted by ISIS militants, answered their door one day to find a plastic bag on their doorstep. It contained the body parts of their daughters and a video of them being brutally tortured and raped.

Another[4] Christian mother from Mosul answered the door to find ISIS jihadis demanding that she leave or pay the jizya (protection money demanded as a tribute by conquered Christians and Jews, according to the Koran 9:29). The woman asked for a few seconds, because her daughter was in the shower, but the jihadis refused to give her the time. They set a fire to the house; her daughter was burned alive. The girl died in her mother’s arms; her last words were “Forgive them.”

The Islamic State reportedly beheaded another Christian leader[5] on February 18. No media reported it, except for one Italian paper in May: “There are reliable reports are that Father Yacob Boulos, was beheaded by the terror group’ militants after he prayed on the altar of his church. He was punished for his faith.”

In a new report, as many as 40,000 Christians — including Muslims who become Christians — are being attacked and harassed by Muslims in migrant homes. “Now in European asylum homes they are finding more and more that they are in as much danger from radical Muslims in Europe as they were in their home countries.”

Christians want to know where the leaders of the West are as they are being slaughtered, exterminated and enslaved. That’s a very good question. Men are beheaded, women enslaved and raped and unspeakable things are done to the children. Christians who are seen going to schools or businesses known to be Christian are targeted for violence and death. And all they hear from the world is crickets.

This is what Obama is bringing to America. Buckle up… here it comes through his refugee resettlement program.