Ah yes… the religion of peace.[1] A Muslim woman decided to celebrate Ramadan at LAX by spewing hatred and terrorist threats. She wants to bomb America, kill gays and basically cleanse the country of infidels. She’s a peach. Evidently the police arrested her and then let her go. She came back and did it again, only even more evil and hateful in her threats. Now the FBI is involved. They carted her off, but her new wrist jewelry sure goes well with her burqa. Gee, this happened ten days ago or so and not a peep in the news. Go figure. 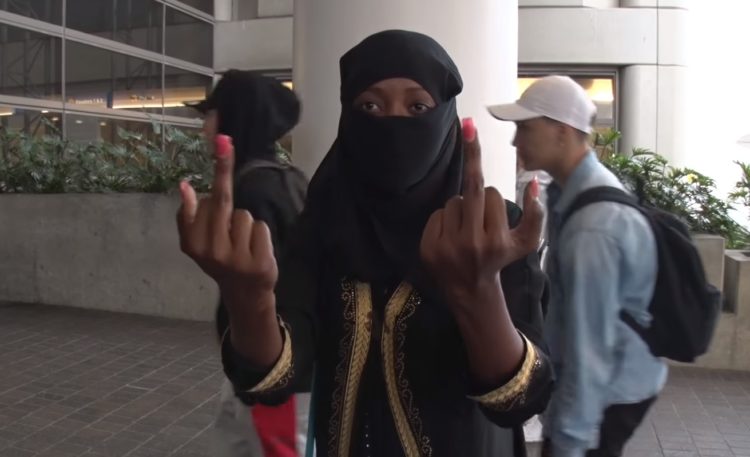 At LAX a muslim woman threatened to bomb America, kill gays, kill lesbians, and said “there are evil people in the world, and there are those who don’t want to accept it (Islam).”…

I can’t believe they let her go to get on a plane. Unbelievable. She was definitely threatening to kill people and then said f**k America and that we would be bombed. Normally, I would say someone like this was just nuts, but these radicalized Muslims all act like this. I thought devout Muslim women were not supposed to go around unaccompanied without a man? Seems to me she doesn’t even follow her own religion. Unstable or not, this woman is dangerous. She even threatened Donald Trump. She should be in custody and if she is not an American, she should not be allowed here. She certainly shouldn’t be flying on planes with her threatening everyone like that. At least they finally arrested her for real. She probably got out pretty fast as well. We are soooo doomed.