A better question than Abdul Razak Ali Artan’s motive for going berserk at Ohio State yesterday is what the Somali maniac was doing in our country. Here is how he got to Ohio:

Artan was a Somali refugee who left his homeland with his family in 2007, lived in Pakistan and then came to the United States in 2014 as a legal permanent resident.

He lived briefly in a temporary shelter in Dallas before settling in Ohio, according to records maintained by Catholic Charities.

Catholic Charities may ring a bell for readers: 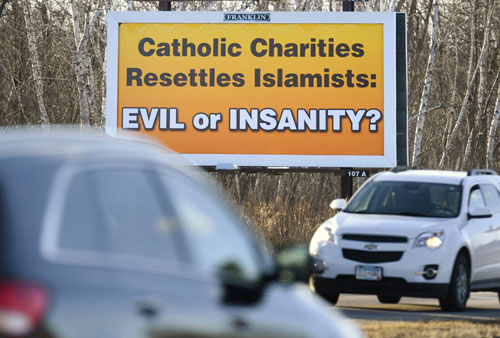 Religiously affiliated nonprofits have been raking in a fortune by helping the government bring in Muslim colonists from terrorist breeding grounds like Somalia. In an Accuracy in Media piece on the topic, Catholic Charities comes up again:

Overall, reports Network, the self-described Catholic Social Justice Lobby, “…the Obama administration has actually increased funding for Catholic nonprofit organizations and programs. In fact, more than $1.5 billion went to Catholic organizations over the past two years.” These figures include an increase from just over $440 million (2008) to more than $554 million (2010) to Catholic Charities USA.

The Obama administration resettled 8,858 Somali refugees in the United States last year, and nearly 43,000 during Obama’s eight years, a huge number that is now raising concerns after a Somali refugee led a one-man attack spree on the campus of Ohio State.

Like Syrian refugees, there is no adequate way to check the backgrounds of the Somalis, according to the head of the Center for Immigration Studies.

All you need to know about their backgrounds to understand that they should not be imported in massive numbers is that they are Muslim. It is doubtful that a teenager like Artan was already a terrorist when he arrived.

This is the potential equivalent of ushering in two or three divisions of a hostile army — then feeding and clothing them through the welfare state. But at least nonprofits are making a fat profit on it.

The purpose of immigration is not to provide a better life for those who have made a mess of their own countries due to their dysfunctional cultures, much less to allow Islam to spread at the expense of Western Civilization. The purpose is to improve our own country by bringing in people likely to contribute more than Democrat votes.

On tips from Lyle and Bodhisattva. Cross-posted at Moonbattery.