One Boston Bomber Suspect Dead, 2nd On The Run

A very fluid situation, at least regarding the 2nd suspected Boston Marathon bomber. 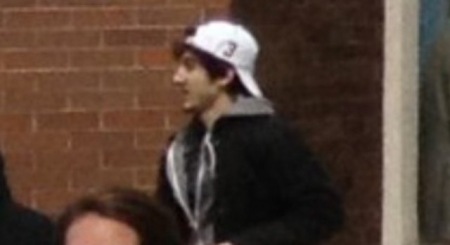 (UK Daily Mail[2]) One of the Boston bombing suspects is dead and the second is on the loose and said to be ‘armed and dangerous’ after a dramatic shootout in the suburbs of the city.

The terrorist dubbed ‘Suspect 1’ by the FBI died in hospital with multiple gunshot wounds and possible blast injuries after a fierce gun battle rocked the Watertown area hours after a police officer was shot dead at the nearby MIT campus.

The other, named today as 19-year-old Dzhokhar A. Tsarnaev, of Cambridge, Massachusetts, who was seen on CCTV wearing a white baseball cap, has gone on the run.

Boston Police Chief Ed Davis said: ‘There is a terrorist on the loose who wants to kill people – do not open your door’.

Today, sources said the suspects were believed to be from the Russia region near Chechnya and had lived in U.S. for at least one year.

According to the news coverage I was viewing as I woke up, the 2nd suspect was supposedly throwing devices on the ground for which the Boston bomb squad was called out, though none seemed to have any secondary explosions one would expect from a bomb.

Right now there are quite a few officers surrounding an area in Watertown with more and more officers streaming in, so it appears as if they have him surrounded.

So, it looks like the highly partisan Left will not get their wish that the bombers were Americans, preferably on the Right. Does this have anything to do with Islamic terrorism? Possibly, as there has been quite a bit of a problems with Islamists in Chechnya for quite some time, though it was generally aimed at the local area and at Russia. Why they would do this in Boston? That’s the $25,000 question. There were jihadis from Chechnya found in Iraq and Afghanistan. Is this related? Or just two wackos?

More: the name[3] of the second suspect is nineteen year old Dzhokhar A. Tsarnaev. Everything is pretty much shut down in Boston. Schools, mass transit, you name it.

More: Law enforcement has been surrounding a home[4], explosions were heard, as were possible shots. Cops do not seem to be on as much edge as they were just 10 minutes ago, so, something happened. Perhaps a 3rd person of interest?

Person, not a suspect, is in police custody at the house on Norfolk St, where the brothers lived – @nbcnews[5]

There are conflicting reports on when they came

Some are still saying all came recently. Some say the family came in 2002-2003, and older brother came recently. Wouldn’t change the fact that they are not homegrown domestic bombers, but foreigners linked to a country that is 90% Muslim with lots and lots of them being radicalized.

More: Over at Grist[8] (which, as you might know, I tend to make fun of regarding “climate change” but is still one of my favorite sites), Jesse Zimmerman has some interesting, and disturbing, pictures of an empty Boston.