One Of London Bridge Jihadis Had Been Reported To Police Twice 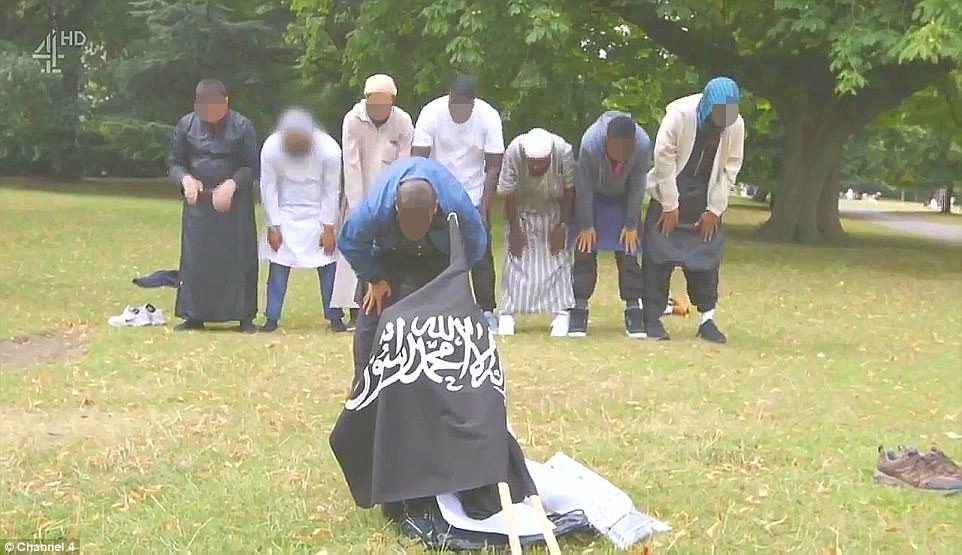 (The jihadi in question is 3rd from the left, between two wearing white. Photo from UK Daily Mail)

So far, the British authorities have refused to release the names of the Islamic jihadis, as they have plenty more raids and arrests to conduct, but that might change today[2]. Here’s something we do know about one of the jihadis

One of the three jihadists who murdered revellers in central London on Saturday [4]had been reported to the anti-terror police on at least two occasions, it has been claimed.

A former friend of the terrorist, who was shot dead by police along with two accomplices, [5]claimed he had been radicalised while watching YouTube videos and said he contacted the authorities ­after becoming concerned over his friend’s extremist views.

A neighbour also claimed she had contacted police in Barking, east London, after the suspect tried to convert her children to Islam and radicalise them. The man is not being named at the request of the police.

The former friend claimed he contacted police after comments the man made about other previous attacks. But he said the authorities had failed to act and take action despite evidence of increasingly extremist views.

The jihadi spent lots of time watching Youtube videos of Islamist radical Ahmad Musa Jibril, who the UK Telegraph refers to as a “hate preacher”, rather than an extremist cleric. I guess they have a limit on how much they can discuss radical Islam.

Yet, the British authorities did nothing. The UK Daily Mail[6], always a bit more sensational, covers the same story

The security services face difficult questions today over how at least one of the London Bridge terrorists slipped through the intelligence net despite being reported to the police at least twice for his extremism.

The 27-year-old Muslim, known to friends as ‘Abz’, appeared in a TV documentary last year about British jihadists – and was involved in a filmed altercation with police after an ISIS-style flag was unfurled in Regent’s Park, London.

He was caught on camera alongside two notorious preachers who were well known to police and intelligence officials because of their extremist views.

A friend of the suspect had reported him to the anti-terror hotline after he became radicalised by watching extremist videos on YouTube and police were also warned about the suspect radicalising children in a local park two years ago, giving them sweets and money.

Why was nothing done? Neither article really speculates. Could it be the aversion to anyone putting themselves out there which would cause them to be accused of “Islamophobia”, leading to the investigator to be investigated and sanctioned, perhaps fired? There’s a disturbing tolerance for radical Islam in Britain, which has led to such incidents as the Rotherham child rape issue, and known radical jihadis being ignored. Authorities are almost afraid to do anything, lest they be accused and have the government come down on them.

(Fox News[7]) While such reviews remain in preliminary stages, a British intelligence source told Fox News that it is an “all hands at the pump” approach, with Joint Intelligence Operations to be carried out collaboratively with M15, Scotland Yard and the Army’s Special Air Service (SAS) all involved.

The points of focus include: recruiting and deploying even more counterterrorism officers, and pushing through new laws to “round up” suspected terrorists and, if convicted, stripping them of their citizenship as a deterrent.

“There is also early talk that things could go as far as banning the burka,” the source said.

How about just not letting them in to start?