Suspicious Man Spotted in Rural Missouri. What He Was Doing? OMG…

Earlier this month[1], a strange man was spotted in the woods in rural Missouri and caught on a deer cam. He appears to be Middle-Eastern. The man was approached by a local resident and became aggressive and angry. He was also speaking a foreign language. You can imagine the resident’s alarm and he did call the police. I understand the man was from Illinois and had relocated to Missouri. He is Muslim from what I have heard. When the resident encountered the man originally, he came out of the woods, screaming arms wailing, making a fist and was just screaming. It was an OMG moment. Considering the purchase of hundreds of cell phones from local Walmarts by Muslims this month and the theft of propane tanks around the area, citizens are getting terrorist jitters. 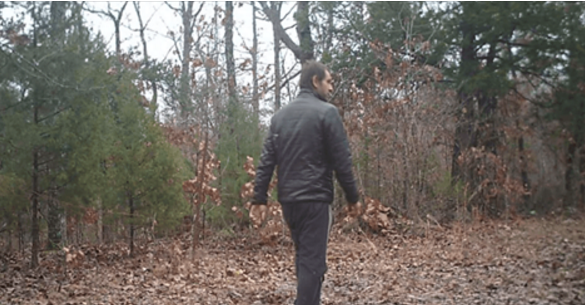 A deer cam in rural Fredericktown, MO recently captured a suspicious Middle Eastern-looking man wandering through the woods. This combined with reports of Middle Eastern men making large, mysterious cell phone purchases at Missouri Walmarts has everyone talking about a possible terrorist attack.

According to Crusade Command[3], the man in this photo was approached the next day by a local resident. When confronted, the Muslim immediately became aggressive and started speaking in a foreign language. A police report was subsequently filed.

Located 89 miles south of St. Louis, Fredericktown has a population of about 4,000 people. Needless to say, they aren’t used to seeing many foreigners, much less Middle Eastern Muslims.

Authorities eventually tracked the man down[4] and he did indeed come from Chicago. He had lived there for 25 years and was of Polish descent. He claimed he moved to Missouri to get away from his parents. That sounds very sketchy to me. I also have my doubts on the Polish descent angle considering the guy was speaking in a foreign tongue. He’s supposedly on his way to St. Louis now. This whole thing just stinks. Add to it the fact that explosives have been found buried in the woods there and they had to be detonated by experts. These weren’t just everyday explosives either. I’ve reported on this before and have been told it is being blown out of proportion. Well, I don’t think it is and all these things together are very troubling. As of yesterday, Philadelphia was looking into multiple thefts of propane tanks and earlier this month Muslims were seen buying propane in large quantities in Arizona. This will be nothing to worry about until the day we should have worried.