Since moonbats react to mass shootings by calling for gun bans, it makes perfect sense that this would be their response to the widespread Muslim fad of driving vehicles through crowds of pedestrians:

Cars and other vehicles “have turned into deadly weapons”, and should be banished from cities to stop attacks like the one in Stockholm from happening in future, according to Aftonbladet editorialist Eva Franchell.

Crackdowns on immigration or extremist ideology are not the way forward when it comes to terror prevention, according to the veteran journalist, writing after Friday’s terror attack in Stockholm left four people dead.

Instead, it is cars — which she calls “effective murder machines” — that Franchell says “must simply be removed from city centres and places where people gather, if people are to be protected in future”.

Islam has been drenching the world in blood for 1,400 years. For most of this time, Muslims managed to kill without benefit of automobiles. However, banning cars would not be less effective against Islam than displays of flowers and candles.

In case the hordes of mostly unassimilable Muslims Sweden’s government has been importing don’t convince people to give up their cars, there are other arguments:

The idea of reducing the number of cars in Swedish cities was backed last month by Sweden’s environment minister, who argued that driving is a gender equality issue as well as a matter of shrinking the nation’s carbon emissions.

We are left to guess at the real reason liberals want to ban cars. Most likely it is because cars afford individuals independence, but it could be that progressives will ban most anything if they can find a pretext.

No wonder lefties love Islam so much. Every time Muslims kill us with something, they have an argument to ban it. It won’t end until they have banned guns, cars, chainsaws, blunt instruments, sharp instruments, hands, teeth… I should have said, it won’t ever end. 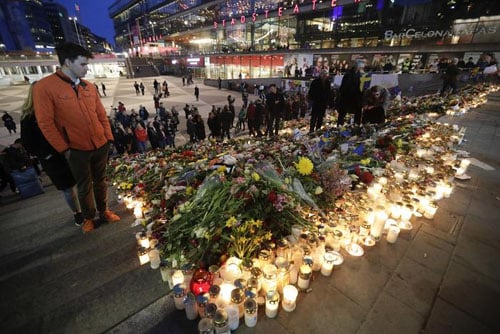 Not more effective against Islam than banning cars.

On tips from Bodhisattva and Dragon’s Lair. Cross-posted at Moonbattery.