Terrorist Pays Ultimate Price For Serving Allah – When Bomb Goes Off At 11,000 Ft And THIS Happens!

Whoopsie![1] Looks like another terrorist work accident in play. An airplane over Somalia had a blast on board and a gaping hole was punched in the side of it. Ejected and falling to earth was the horrifically burned body of a now deceased Jihadist. Terrorists strategically prefer to sit near the wing of a plane where the fuel tanks are to cause a bigger explosion. Federal authorities are closely monitoring the investigation into an explosion aboard a Daallo Airlines flight over Somalia and are looking at Somali Al Qaeda affiliate Al Shabaab as a leading suspect, a law enforcement source told Fox News[2] on Wednesday. The FBI would not comment on the bombing and the TSA would not comment on any enhanced security measures the agency will be undertaking in light of the incident. 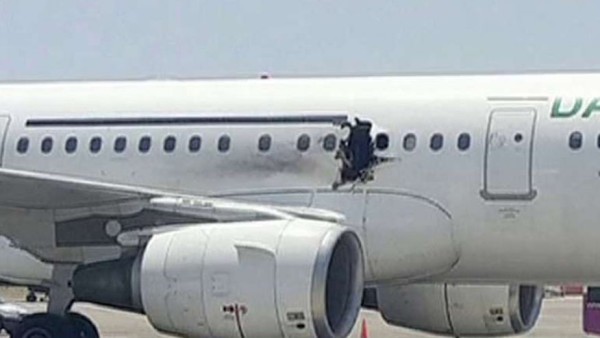 Terrific news! This is the best possible update to an earlier report about a passenger being sucked from the cabin of a commercial plane.

The passenger reported to have been killed is none other than the terrorist who was trying to down the plane in the first place. That’s right! The jihadist managed to kill only himself.

There’s no news like good news and this is the best kind. Not only is there one less terrorist in the world, but he managed to embarrass his cause on his way out.

The airliner made an emergency landing, but the only one really hurt was the moron terrorist who couldn’t even blow himself up right. Two passengers suffered minor injuries, but will be just fine. The Airbus A321 plane, operated by Dubai-based Daallo Airlines and headed to Djibouti in the Horn of Africa, was forced to land minutes after taking off from the Mogadishu airport, Somali aviation official Ali Mohamoud said. Authorities in the Balcad region, about 19 miles north of Mogadishu, later said they found the body of a man believed to have been sucked out of the plane. Passengers have reported that after the blast at 11,000 feet, a man with burning clothes was sucked out of a hole in the fuselage. A loud explosion was heard in the plane which was ascending when the event took place. It is believed that the would-be bomber hid the explosive device in a wheelchair that he arrived in. The wheelchair allowed him to bypass security. Once on board, he is said to have switched seats without the notice of airline staff. Someone failed to get the title ‘suicide bomber’ fully defined here.