Terrorists Stab Female Soldier As She Gets Off A Bus – She Responds With This! GAME OVER.

Two Palestinian terrorists[1] attacked an Israeli female soldier as she got off a bus… she shot both of them dead on the spot. Good for her. She is seriously injured, but is expected to survive. That is one brave and lethal woman. Obviously, both dirt bags were pronounced dead at the scene. You can see one of them who was clutching a knife until the moment he was dispatched to hell where he belongs. The attack was the latest in a series of attacks against Israeli soldiers or citizens by Palestinian terrorists. Many of them have used knives or cars as the implements of death, killing over 30 Israelis in the process. 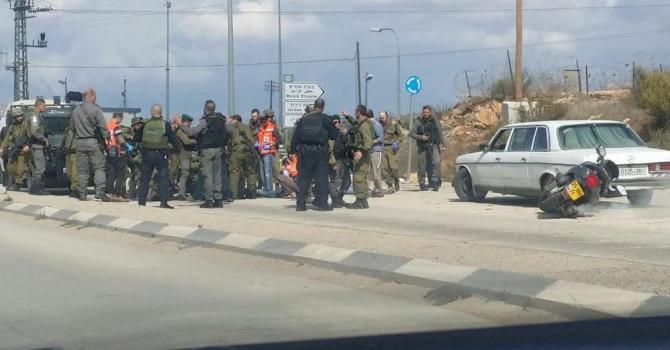 It was a sadly familiar scene — an Israeli soldier stabbed by Palestinian terrorists[3]. However, what started as another tragic case of Islamic jihadists getting the upper hand on the Israelis turned into a story of bravery, as the soldier managed to kill the terrorists.

Moreover, their death was caught on video and posted on the Internet. We must warn you that it is graphic, but it shows what the consequences for jihadists and their sick ideology are.

According to i24 News[4], the incident happened at Ariel Junction in the West Bank yesterday afternoon. The twoPalestinian terrorists[5] stabbed and injured the female soldier near a group of Jewish settlements in the hotly-contested area. The stabbing took place as the soldier was disembarking a bus.

A total of 196 Palestinians have been killed since the attacks began last October. While the majority have been killed themselves in the process of attacking innocent Israelis, some died during protests and clashes with authorities. You won’t see me shed a single tear for their deaths and there is no sympathy here. All this murder and terrorism is solely the purview of the Palestinians who let murderous hate rule them. Israelis have a right to defend themselves and others from these evil asshats. And terrorism knows no age as many of the murderers are children or teens. I’m thrilled this woman got the chance to take them out before she went down. She’s a hero and I pray that she has a speedy recovery.

TERROR – AFTERMATH: 2 dead terrorists lying near their female victim whom they stabbed while disembarking from a bus pic.twitter.com/r1qAVsx3Kc[6] 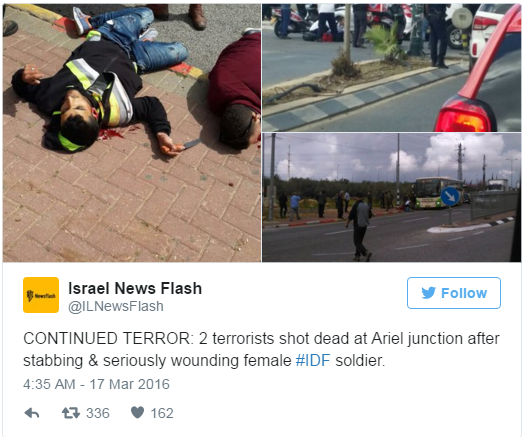