Toxic Masculinity Rather Than Islam Blamed for Manchester Atrocity

What do we hold responsible for the horrific Islamic terror attack that killed 22 in Manchester? Not Islam, of course; that would be Islamophobic. How about toxic masculinity? That’s where Janey Stephenson places the blame:

Toxic masculinity is what entitles a man to take a weapon and take other people’s lives in the name of his values.

Except maybe in the case of Planned Parenthood abortionists.

The easiest way to think of it is to imagine the military. After all, soldiers are paid mass murderers. Different wars, same tactics.

To a progressive, there truly is no difference between an Islamic terrorist and the soldiers who defend us from them — except that progressives are sympathetic toward the terrorists.

If we want this violence to stop, we need to address the root cause and its everyday manifestations before they escalate. These men [i.e., mass murderers like Salman Abedi] were not extremists existing outside of society; they are products of it. They were men drunk on the entitlement that patriarchal cultures serve them.

All men are homicidal scoundrels, but men who aren’t moonbats are the worst:

So, how do we stop the Muslims that liberals keep importing from indiscriminately murdering little girls?

We need to acknowledge that hateful, toxic masculinity is bred among us in the everyday. We need to start pulling apart and dismantling its roots in male entitlement and structures that promote masculine supremacy.

In short, we must be moonbats. After all, Muslims never launch terror attacks in places thoroughly dominated by moonbats, like New York, London, Paris… Oh wait. 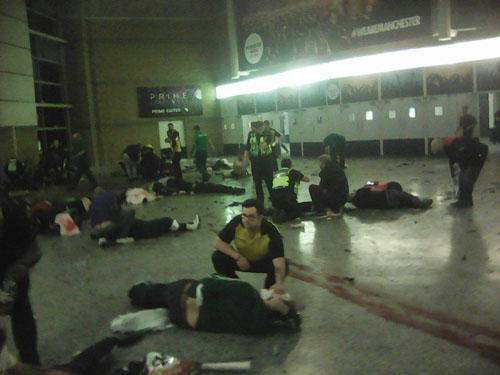