ISIS sentenced a 15 year-old boy to death[1] for being gay and threw him off a building to the adoring cheers of Muslims below. He died upon impact, but if he had lived, they would have gleefully stoned him to death. Most gays are thrown from buildings, but some are beheaded or crucified. This boy was found in the compound of a high-ranking ISIS leader. The leader was also sentenced to death, but militants pleaded for him and argued to have him sent to the front lines in Iraq to die a warrior’s death. That boy may have had no choice in the matter, but he’s certainly the one who paid the ultimate price. His only crime may have been that he was handsome. This is how Islamists choose their ‘dancing boys.’ They have to be young and attractive. These murderous fiends know no bounds or the definition of justice and mercy. 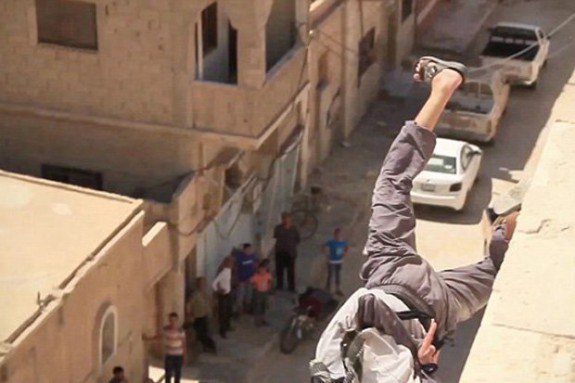 Militants with the so-called Islamic State in Iraq and Syria have reportedly thrown a 15-year-old boy from the roof of a building in the northern Syrian city of Deir ez-Sor, reports ARA News[3].

Friday’s execution is the latest report of deadly violence targeting those believed to be (or accused of being) gay in the Middle Eastern regions controlled by the the terrorist group also known as ISIS, ISIL, or Daesh.

As with other antigay executions, the young man’s murder was conducted in front of a large crowd, who watched as militants bound and blindfolded the 15-year-old, before throwing him off the roof to his death. In similar incidents over the past year, victims who have survived the fall have been stoned to death by militants and residents waiting on the ground. Other executions have contained beheadings of people thought to be LGBT or otherwise at odds with the group’s radical interpretation of Islam.

ARA News reports that the young boy was allegedly arrested “in the house of an ISIS leader” on Thursday. That leader, identified by the news site as Abu Zaid al-Jazrawi, was also sentenced to death by a Sharia court, but militants convinced leaders to strip al-Jazrawi of his position, and send him to fight on the front lines in Iraq.

According to the militants’ interpretation of Islam — which many Muslim clerics have denounced as wholly un-Islamic — Sharia law requires those convicted of the “crime” of homosexuality to be thrown from the tallest building in the city where the victim was arrested.

ISIS executed at least 30 gay men in 2015. Where is the gay community’s outrage over this? The silence is deafening. ISIS commands that all families come and watch the festivities, even the kiddies. First they read the charges, then they blindfold the man and shove him off the building to his death. No one does a thing about atrocities like this or Christians who are being exterminated. There’s a lot of big talk from Russia and the US, but very little action to stop the spread of the Caliphate or to rid the world of ISIS. This evil has to be stopped. ISIS is known for its depraved execution methods, using baby-faced children as killers, while methods of murder include tying prisoners to ancient monuments before blowing them up, drowning them, burning them alive and crushing their victims to death. This brutal enforcement of Shariah law has never been seen in history and the world just shrugs at it. Death is always easy to witness when you aren’t affected… but sooner or later they come for you personally. Then it is different and far, far too late. 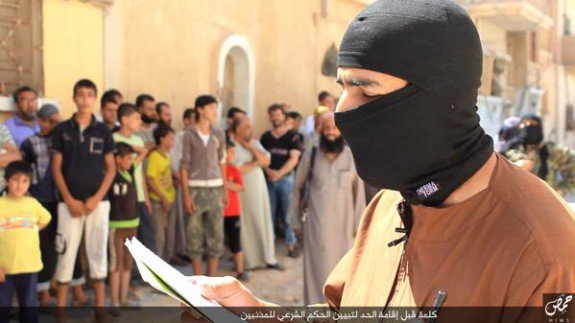 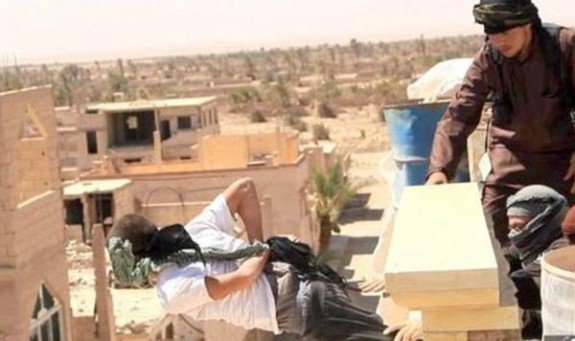 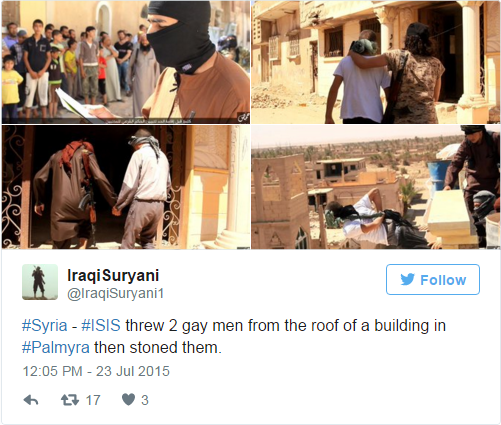