Barack Obama’s so-called “moderate” rebels[1] in Syria that we have been funding to fight Assad and supposedly ISIS, have decapitated a 12 year-old boy as a spy. There is a video that shows them graphically cutting off the child’s head… I won’t show it here because I find it far too disturbing. If you want to see it, go here[2]. The rebels are calling this a mistake. The boy could be as young as 10. In a statement on Facebook, the al-Quds group reportedly confirmed it found the child was a 12 year-old Palestinian named Abdullah Issa, who lived in the rebel-controlled Mashhad neighborhood in Aleppo, Syria, with his “poor” family. The boy’s sister claims he was a pro-Assad fighter. He was just a little boy and no one deserves to die like that. Monsters. 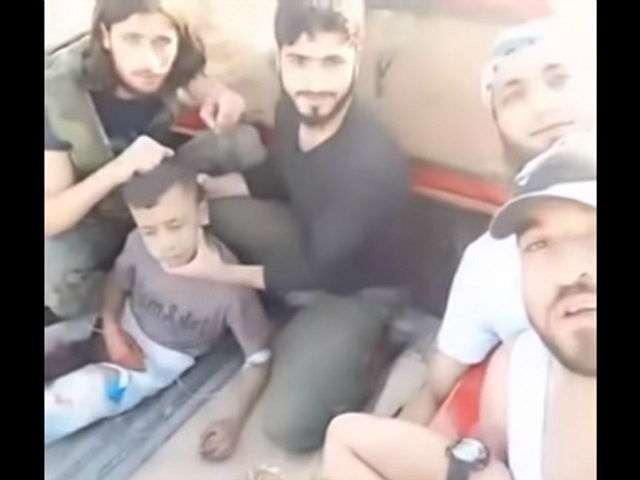 The horrifying decapitation of a kidnapped boy on spy accusations was “an individual” mistake, declared the U.S.-backed, so-called “moderate” Syrian rebel group that carried out the appalling crime, claiming that it will open an investigation into the beheading.

Members of the Nour al-Din Zenky Movement killed the boy, accusing him of being from the Liwa al-Quds (Jerusalem Brigade), a Palestinian militia that fights on behalf of Syrian dictator Bashar al-Assad.

I might think this was a nasty surprise for the US, except this isn’t the first time this has happened. It’s not even the second. We are saying if the atrocity is true, we ‘may’ stop funding them. Really? You’ll think about it, huh? There are no good sides here and we should not be funding either side. As far as I’m concerned, all these Islamists should be wiped from the face of the earth. The boy was being taunted and then he was beheaded by the anti-Assad Syrian rebels who grabbed him by the hair as they accused him of being a member of Liwa al-Quds. They tied the boy up in the back of a pickup and then took a knife to his throat. Then they joyously held his head aloft declaring some kind of victory. Yeah, you won against a helpless little boy. Our military so needs to go into the glass factory business.