A Reno, Nevada shooting at Procter R. Hug High School was reported Wednesday at around 11:30 a.m., resulting in a ‘code red’ shutdown of the entire campus. The school is now cleared and no one was killed in the matter…except one very violent student might change that.

Police had at first declined to substantiate any reports immediately after the 11:30 a.m. shooting that the teen suspect had been armed with a knife or not. But Soto spoke with reporters at a news conference at police headquarters on Wednesday night confirming that he was ‘armed with at least one knife and threatening other students’ during a fight at the high school located north of the city in a working class neighborhood.

The knife-wielding student refused to comply with the school police officer’s verbal commands to drop the knife and the officer in the end fired his service weapon, ‘striking the student and … stopping the threat,’ Soto said.

The Chief continued without answering any questions: ‘Once the threat was stopped, the officer immediately began to provide medical aid to the student until emergency medical assistance arrived.’ 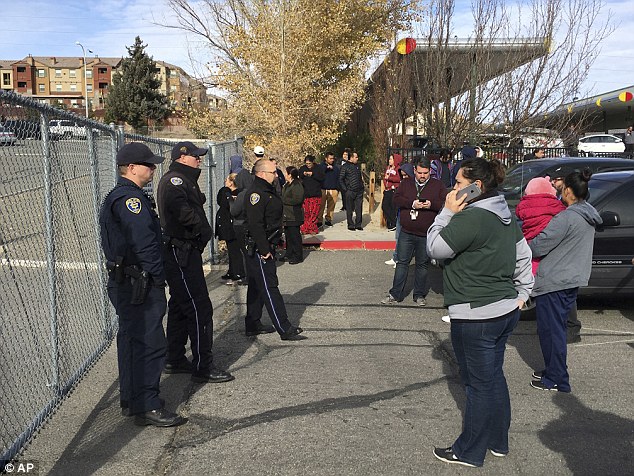 Robert Barragan, a student that witnessed how the event unfolded, shared with local reporters that an officer shot a student in the shoulder after he had pulled a knife and stabbed a classmate during a one-on-one brawl outside the school library.

Barragan, claimed that the two male students were fighting right outside the school library when the campus officer shot the knife wielding teenager, who was lunging around at students. There have been no further reports of any other students being hurt during the ordeal.

What was this kid thinking? The school obviously had a campus police officer on the premises who reacted appropriately. If it wasn’t for that guy, I believe things would have been a lot more bloody.