Put this kid[1] under the jail: 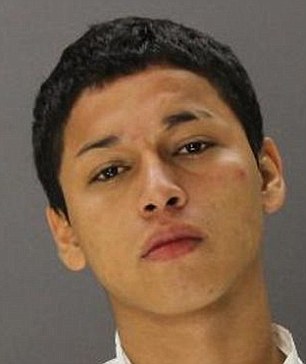 A 17-year-old illegal immigrant who is accused of strangling his five-year-old cousin to death before leaving her body hanging in a closet has admitted raping her.

Angel Sanches-Zenteno was arrested earlier this month after Katherina Gonzalez’s body was found inside a vacant apartment in Lake Highlands, Dallas.

Sanches-Zenteno told police he was with the girl, but said another man who he identified only as ‘Carlos’ was responsible for her death.

According to police Sanches-Zenteno told them his cousin followed him into the building after he was taken hostage ‘Carlos’.

Sanches-Zenteno claimed ‘Carlos’ forced him into the building at gunpoint before shutting him in the closet.

He had initially told police that he ‘did not rape’ Katherina, according to police documents, reports Dallas News.

He told another investigator that he did sexually assault the girl for ‘less than a minute,’ but did so because the other man was holding him at gunpoint and told him to.

Police took DNA samples from Sanches-Zenteno and sent them away to a lab for analysis.

The lab matched his DNA to some found in the girl’s underwear, reports the news website.

That’s a great story, kid. The only problem is, someone saw you urging your cousin into the vacant building:

Freddie Washington says he saw Sanches-Zenteno lure Gonzalez into the abandoned housing block, telling the girl ‘Come on, come on,’ before the pair disappeared inside.

Mr Washington told WFAA 8: ‘I think he waited for me to leave around the corner and then took her into the vacant apartment.’

What should be done with him after he’s convicted?