U.S. Aircraft Carrier Fleet in SHOCK after Iranian rockets are fired and miss them by just 1500 yards! Now, Senior U.S. military commanders are accusing Iran’s military of “HIGHLY PROVOCATIVE” [1]actions against the American Aircraft Carrier, and they want answers! 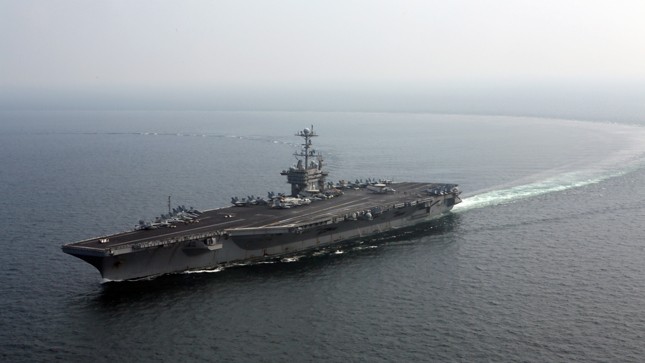 The USS Harry S. Truman was crossing international waters in the Strait of Hormuz when Iranian Revolutionary Guards (IRCGN) conducted a live-fire exercise right nearby, according to a statement.

An Iranian navy attack craft fired several unguided rockets near the carrier, officials said. A French frigate, the U.S. destroyer USS Bulkeley and other commercial traffic were also in the area at the time of Saturday’s incident.

Only 23 seconds warning was given before the weapons were fired, according to U.S. Navy Cmdr. Kyle Raines, a spokesman for U.S. Central Command.

The rockets were not fired at the Truman and other ships, and there were no direct communications between U.S. and Iranian navies, military officials said.

“The IRGCN’s actions were highly provocative,” Cmdr. Kevin Stephens, spokesman for the U.S. Fifth Fleet, said Wednesday in a statement.

Nobody from Iran’s foreign or defense ministries gave official comment, but the country’s state-run news agency, Fars, said in its report of the event that no vessel was in danger.

The incident was a planned training exercise and all vessels in the area had been warned, it said.

The official said the U.S. ships were in the “internationally recognized maritime traffic lane” at the time, not in any territorial waters, when the Iranian navy announced over maritime radio that it was about to conduct a live-fire exercise and asked other vessels to remain clear.

After the warning, the rockets were fired from a position about 1,500 yards off the carrier’s starboard side and in a direction away from passing coalition and commercial ships and the traffic lane, the official said. The rockets were not fired at the Truman and other ships, only near them.

Nobody from Iran’s foreign or defense ministries gave official comment, but the country’s state-run news agency, Fars, said in its report of the event that no vessel was in danger.

A 23 second warning, really? ….and to think, Obama gives ISIS a 45 minute warning before bombing their oil tankers. Shmuck!