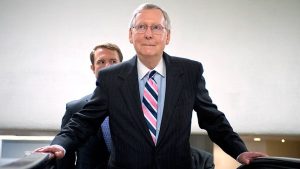 [1]Does anybody really believe Republicans are trying to defund Planned Parenthood? Or is this yet another example of political theater to allow establishment GOPers to feign outrage over videos of PP doctors selling baby body parts? Mitch McConnell pushed avote to fund PP[2] even after seeing two videos. So why should the American people think he’s actually seen the light?

The Hill[3] reports Senate Majority Leader Mitch McConnell (R-Ky.) is fast-tracking a bill[4] to cut off federal funding for Planned Parenthood, after senators huddled in his office Tuesday to work out the details of a bill.

Speaking on the Senate floor, the Republican leader started the process, known as Rule 14, which allows the bill to skip over being sent to a committee and go directly to the Senate floor for a vote

“The horrendous videos of senior executives from Planned Parenthood discussing in callous tones and shocking detail their role in a national scandal requires a congressional response,” the Republican leader said in a statement. “This legislation would ensure taxpayer dollars for women’s health are actually spent on women’s health — not a scandal-plagued political lobbying giant.”

McConnell is expected to finish the fast-track process Wednesday.

The latest legislation comes after a third video[5] surfaced Tuesday, which appeared to show a Planned Parenthood official in Colorado negotiating with someone posing as a buyer of fetal tissue.