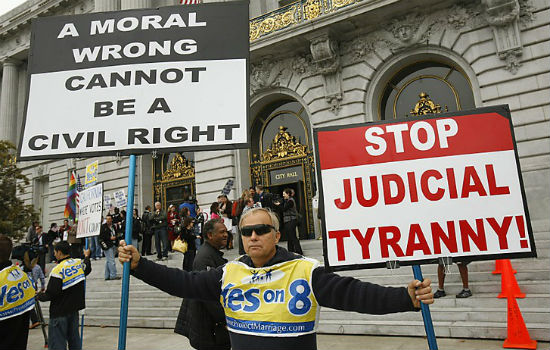 Though the Supreme Court may ultimately determine this year[3] whether states can ban same-sex marriages, the debate is far from over in Oklahoma.

Early in the legislative session, State Rep. Sally Kerns withdrew her bill, which was dubbed a “license to discriminate” by ThinkProgress[4] and other organizations, to allow businesses to refuse service to LGBT people.

However, another bill designed to protect businesses that refuse to participate in same-sex wedding ceremonies may come with a price. Or rather, a sign.

After initially voting against the bill, calling it too broad, and claiming it protects discrimination, Virgin worked with ACLU of Oklahoma and Freedom Oklahoma to come up with a plan, according to a post on her Facebook page[5].

Should Virgin’s floor amendment be adopted, businesses refusing service would be forced to announce this policy in every place they do business, including the website. From the amendment language[6]:

Any person not wanting to participate in any of the activities set forth in subsection A of this section based on sexual orientation, gender identity or race of either party to the marriage shall post notice of such refusal in a manner clearly visible to the public in all places of business, including websites.

The notice may refer to the person’s religious beliefs, but shall state specifically which couples the business does not serve by referring to a refusal based upon sexual orientation, gender identity or race.

Kevin Calvey (R-Oklahoma City) explained in an interview with IJReview that laws like HB 1371 are necessary because of lawsuits levied against business owners who have sincere religious objections to performing services in same-sex wedding ceremonies.

Nobody wants legally-sanctioned discrimination, but polite refusal of services based on religious and moral convictions is hardly the same thing. It seems this bill is a step in the right direction.