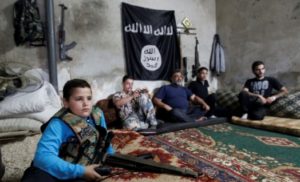 Not to worry because President Obama called ISIS [2]the JV team!

Christian Post [3]reports as previously reported[4] by The Christian Post, minors as young as age 6 are separated from their family and sent to jihadi training camps, where they are indoctrinated with ISIS’ barbaric and extremist mindset through the teaching of sharia courses. Once the “cubs” are indoctrinated, they take part in extensive and dangerous, military, combat and martial arts training.
“They use children because it is easy to brainwash them,” head of the Syrian Observatory Rami Abdulrahman told Reuters[5]. “They can build these children into what they want, they stop them from going to school and send them to IS schools instead.”

The report indicated once the children are trained and placed on the battlefields, they’ll be used in combat roles and will also be used for espionage operations and propaganda.

In the past, the group has also used children as human shields, forced them to donate blood[6] to fighters, and tried to get the kids to kill themselves in suicide bombings[7].

Melanie Smith, a researcher with the the counterterrorism think tank Institute for Strategic Dialogue, also explained that children who live in ISIS-controlled regions in Iraq and Syria don’t have any other option except to go to the extremist training camps.

From The Last Tradition[9]