It’s never a pretty story when rumors of affairs surround politicians, especially when they are running a campaign to be President of the United States…We’ll have to continue paying close attention to this story, but it seems Senator Marco Rubio may have had an affair[1], not once, but twice… 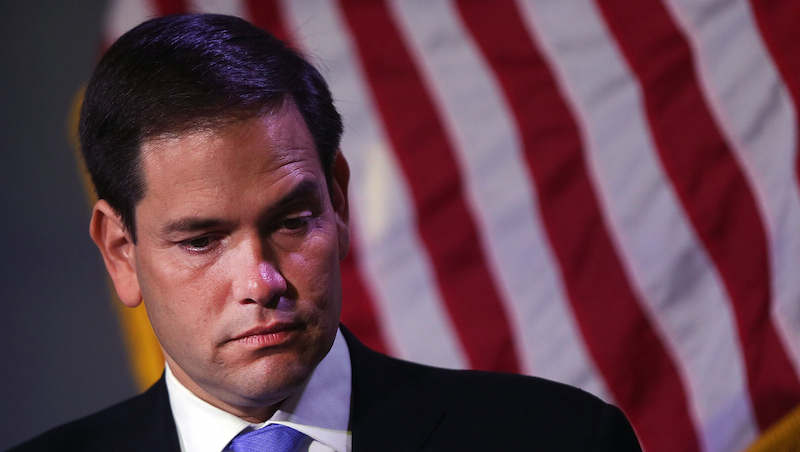 U.S. Senator Marco Rubio has carried on at least two extramarital affairs since he entered politics.

GotNews.com can confirm through lobbyist sources in DC and Tallahassee that at least one DC-based lobbyist has had an extra marital affair with the first term U.S. Senator. Still another Florida-based lobbyist has been IDed as carrying on an affair.

The first woman was Amber Stoner, a 36-year-old woman who worked for Rubio when he was head of the Florida Republican Party.

Stoner, who later became a lobbyist, traveled with Rubio at least seventeen times, including several resort towns on the GOP credit card. Rubio still hasn’t released all of his credit card records from his time heading the party.

A pattern has emerged where Rubio often has affairs with women who work for him or who could benefit from his access or policies. As Rubio’s election prospects diminish — he only won Minnesota — the willingness of ex-supporters to throw him under the bus has also increased.

Sources from both the Jeb Bush campaign for president and the Charlie Crist for U.S. Senate campaign confirm that they investigated the Amber Stoner-Rubio relationship. A journalist who investigated the affair found Stoner threatening a libel suit.

Stoner, who has been a lobbyist for the health care industry–just like Rubio, was suddenly cut off after Rubio ascended to the Speaker of Florida House. She had formerly been the Foursquare Mayor of… Marco Rubio’s office.

An email read to GotNews.com shows Rubio increasingly desperate calls for attention from Stoner after Rubio gave her the cold shoulder. GOP officials opposing Rubio from Florida read the email as that of a spurned lover.

Rubio and David Rivera, a disgraced former congressman and Rubio mentor, would attend topless bars with other married members of the Florida legislature, says a high placed GOP party official.

Rivera and Rubio would often party together with lobbyists at an apartment on Munroe Street where cigars, drinks, and single women were on offer. Several prominent lobbying firms retain attractive women to entice politicians into supporting their bills.

Rubio’s closeness with lobbyists may have also been because he was one of them, according to BuzzFeed. That fondness has continued to DC.

The second woman is Dana Hudson, a blonde lobbyist based in the Beltway.

According to two lobbyists in DC in the national security space Hudson has been bragging about having had sex with the senator to other lobbyists.

Hudson lobbies on Homeland Security issues and is personal friends with the very same corrupt David Rivera who once partied with Rubio.

Interestingly, despite an ongoing investigation by the FBI, Rivera still manages to find tickets to the GOP debates. Based upon her Twitter feed Hudson and Rivera seem to enjoy each other’s company a lot.

Hudson attended a Marco Rubio event in December and has planned lunches for him.

Rubio’s wife reportedly knows about Marco Rubio’s extra marital affairs and doesn’t mind them — so long as she and her children are provided for.

One high placed GOP establishment source from Florida who actually backs Rubio over Trump and Cruz expressed shock that Rubio was still carrying on with women while he was running for president. “It smacks of Jon Edwards,” he texted.

GotNews.com is currently investigating claims that Rubio has been carrying on with the female staffer of another GOP senator who has endorsed Rubio in the presidential campaign.

GotNews.com is offering a $10,000 bounty for more women and sources to come forward. If you’d like to donate to that fund, donate here.

We are also putting together a crowd fund to compensate women and encourage them to come forward.

We reached out to both Dana Hudson and Amber Stoner and will update this post when we here more.

Well have to monitor this breaking story for further information, and hopefully we can get some hard facts on the scandal. If this all turns out to be true, it could mean that Rubio is doomed as the new John Edwards of the Republican party, and most likely will be the end of his campaign run…or even his political career.