MAN! This is going to really tick people off, and rightfully so! We have FOUR illegals[1] that are being accused of BRUTALLY gang-raping a woman AND then beating her boyfriend….in Massachusetts. This is what we know… 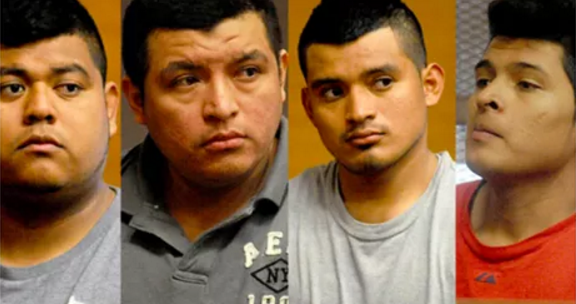 Police report that brothers Elmer Diaz, 19, Arial Diaz, 24, and Adan Diaz, 32 and accomplice Marlon Josue Jarquin-Felipe, 27, were arrested and charged with the brutal attacks. They faces charges including rape, assault with a dangerous weapon, assault and battery, kidnapping, witness intimidation and other charges.

Ariel Diaz has a record of violations such as drunk driving, driving without a license, and driving without insurance, disorderly conduct, and other charges. Additionally Jarquin-Felipe had been deported back to Guatemala as late as April of 2014.

Since 2010, President Barack Obama has sharply reduced immigration enforcement, and has allowed more than 200,000 people from Central America to cross the border and to seek residency.

The four were arrested after the attacks on a couple they were out for a walk in their neighborhood. According to the police report, as the four approached the couple, one of the illegals pulled out a condom and motioned toward the woman.

She was then grabbed by the hood of her jacket and slammed to the ground while two others started beating the woman’s boyfriend. The woman was dragged into a nearby apartment where several began to sexually molest her.

The woman’s boyfriend followed them, forced his way into the apartment and called 911. Police say he was then attacked again. At one point Ariel Diaz came at the man with a chef’s kitchen knife. The victim was able to wrest the knife away avoiding being stabbed in the process.

Eventually the male victim was able to fight off the attackers and help free his girlfriend. The two exited the apartment building and flagged down police. Officers then arrested the four men finding some of the couples’ belongings in the apartment.

“I thought we were going to die. I really did. And I didn’t care if I died as long as I could save her and get her out of there, that’s all I cared about,” the male victim told the Boston Herald.

“I’ve lived here my whole life and I never imagined anything like this could happen just walking down the street,” he added. “The worst part was I felt like I couldn’t do anything.”

The victim noted that his girlfriend is traumatized and has yet to come to terms with her assault.

All four of the illegals have pleaded not guilty but are being held pending a determination on how dangerous they are to the community before being released.

Of course she’s traumatized! This is crap that could be prevented, if people would do their job right. What kind of leadership leaves their people to be lambs for the slaughtering…just because they can’t be bothered to check for wolves in sheep’s clothing?