Some advice to would be carjackers. First, don’t be idiot and don’t carjack in the first place. Two, make sure the guy you are carjacking isn’t federal agent, and make sure you disable the OnStar[1]… 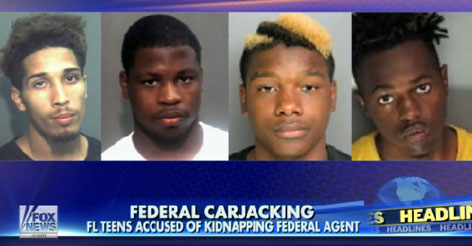 However, as the carjackers rode around town with their victim tied up in the backseat, Alaniz’s wife contacted the Onstar service their vehicle was equipped with, which in turn placed a call to the vehicle.

According to Opposing Views, Orange County Sheriff Jerry Demings said, “The OnStar representative placed a call to the vehicle and heard someone screaming for help.”

The thugs eventually abandoned the vehicle, and Alaniz, outside of a vacant drug house before fleeing. Alaniz was ultimately able to escape the bonds on his wrists and required four stitches to close a gash suffered from the assault.

All four have since been arrested, including the youngest one who turned himself in with his parents. Yay technology!