Just the thought of a 4-year-old walking around in the middle[1] of the night ANYWHERE, let alone Philadelphia, makes me shudder. Thank goodness there are still good people in the world who made sure Annabelle was safe during her little adventure. I can assure you her parents will watch her like a hawk after this. 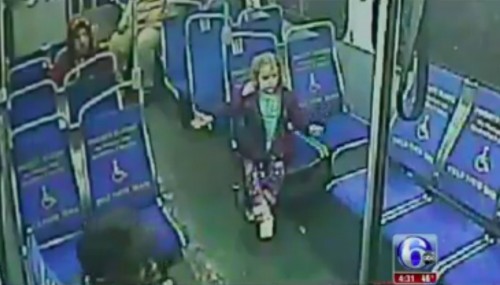 In the wee hours of the morning, Philadelphia bus drivers pick up all sorts of characters.

But around 3 a.m. Friday, driver Harlan Jenifer surely got the shock of his shift.

A man flagged down Jenifer, telling him he found a little girl — decked out in a purple coat and snow boots — all by herself. Surveillance video shows the girl, named Annabelle, boarding the bus.

And her reason for venturing out so late alone?

Annabelle was back with her parents within an hour; WPVI reported that they’ve since figured out a new door-locking system.

“Mom, can you take me to Wawa and get me a slushie?” she asked her mother, Jaclyn Mager, while she talked to WPVI.

“I will take you to Wawa and get you a slushie,” Mager replied, the station noted. “But listen, promise me next time you’ll wait for me, okay?”

I can assure you my mother would not have been quite that loving if I had been found on a bus at 3 in the morning. In fact, I’m pretty sure that as soon as the cameras left, she would have spanked me. Of course, at 4 I knew better than to leave the house without parental permission. A little discipline goes a long way, ladies and gents.