After Alicia Watkins served proudly in Iraq and Afghanistan, she retired from the Air Force only to find herself living on the streets. But with a little recognition from Oprah, some help from a family friend, and self-determination, Watkins is now attending Harvard and helping her fellow veterans with the Wounded Warrior project[1]. 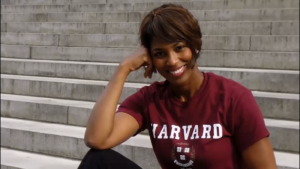 In 2010, Watkins’ allowed “The Oprah Winfrey Show” to document her life as a homeless veteran. Her “kitchen” was a cardboard box of snacks and microwavable meals. Her bed was a car that she rented for $10 a day. Her restrooms were the toilets at various airport hotels.

The 10-year veteran was struggling, but even during her low points, she believed that others were struggling more. At one point, Watkins did have housing, but she gave up her room to a homeless mother and her three kids.

Until her ‘Oprah Show’ interview aired, Watkins’ friends and family had no idea she was homeless.

After the show, Watkins moved in with a family friend. Though she no longer lives in a car, Watkins says that her many health issues have prevented her from being able to work…

With a secure roof over her head, Watkins decided to focus on her education and began applying to colleges.

“I wanted to be able to care for wounded warriors, and so I decided to apply to Harvard University,” she says. “In 2012, I was accepted. My college expenses are paid by the G.I. Bill.”

From a rented car and a cardboard box, to Harvard? Now that is the story of a self-made woman. Alicia is a prime example of the individuals we have risking their lives for our freedom. Even while suffering from a traumatic brain injury, and living on the streets, she had the honor and decency to surrender her room to a homeless mother.

Alicia’s story is a reminder that our men and women in uniform really are among the finest our country has to offer.